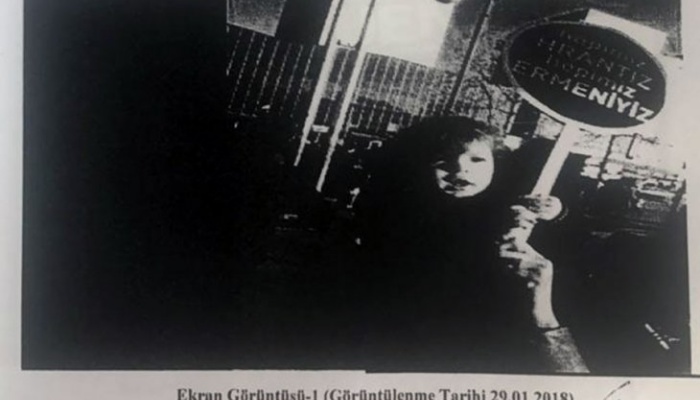 A Turkish prosecutor has entered into evidence a photo in which a toddler holding a placard bearing a well-known slogan referring to the assassination of Turkish Armenian journalist Hrant Dink in his indictment of journalist Sibel Hürtaş, who stands accused of disseminating terrorist propaganda, the Evrensel daily reported on Tuesday.

Hürtaş and Hayri Demir will appear in court in Ankara on Thursday, facing more than 10 years in prison.

They were detained by police on Jan. 22 on accusations of disseminating terrorist propaganda and released pending trial four days later.

In the indictment a photo posted on Twitter of Hürtaş’s 1-year-old son holding a placard saying “We are all Armenians! We are all Hrants!” was listed among the “social media posts that can be regarded as an element in the commission of a crime.”

The photo was taken in 2015 during a remembrance of the murder of Dink, who was killed in 2007 by a hitman allegedly tied to ultranationalist factions inside the Turkish state.

During Dink’s funeral a huge crowd gathered in İstanbul and shouted “We are all Armenians! We are all Hrants!” a slogan that has been used in demonstrations on minority rights.

In Demir’s case, a photo taken at an Ankara nature park is being treated as “evidence.”

The Turkish government has recently put pressure on journalists who cover stories about minorities, environment and human rights.