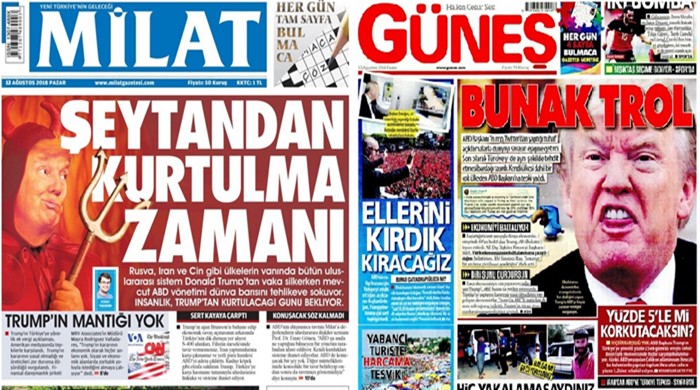 Turkey has been facing a currency crisis since its relations with the US administration were dramatically strained over a court decision to put Brunson under house arrest after almost two years in pretrial detention rather than release him as demanded by the US administration.

“Time to free ourselves from the devil ” the Milat daily said in its front page headline, claiming Trump used Brunson as a pretext to put economic sanctions on Turkey but that in reality it was a reaction to Ankara’s stance against Washington on the purchase of a Russian S-400 missile defense system, solidarity with Palestine, opposition to the Iran sanctions and a move to use local currencies in regional trade.

“The US has gone mad. Trump, who attacks like a rabid dog, has betrayed international law and the international order in his hostile stance against Turkey,” wrote the daily.

After imposing economic sanctions on two Turkish ministers on Aug. 1 for their role in the detention of American evangelical pastor Brunson, President Trump on Friday ramped up sanctions on Turkey by doubling US tariffs on Turkish aluminum and steel imports to 20 percent and 50 percent, respectively.

The Güneş daily on Sunday called Trump a “senile troll” in its lead headline, claiming that the US president has been at the center of criticism for tweets that have brought the world to the brink of war and for initiating a trade war that threatens 60 percent of the world economy.

“We are going to break the hands of those who fired the currency weapon,” the Sabah daily said in its front page headline, repeating a comment made by Erdoğan on Saturday.

Other pro-government dailies also in their headlines repeated Erdoğan’s message published in The New York Times on Saturday: “We may seek new friends and allies.”

In a speech in the eastern town of Bayburt, Erdoğan said Turks “will respond to those who start an economic war against” the country, in an attempt to restore confidence in the Turkish lira after it plunged by more than 20 percent against the dollar on Friday.