[OPINION] US: once burned, twice shy about Turkey’s Erdoğan 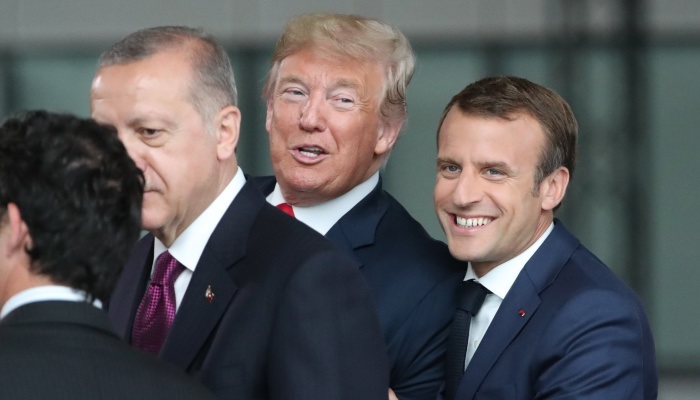 The growing US pressure on the government of President Recep Tayyip Erdoğan is perhaps the only avenue left to reattach Turkey, a faltering NATO ally, to the transatlantic alliance given the colossal and systemic failure of national institutions that buckled one after another under the unprecedented crackdown by the Islamist regime. It is crucial that other NATO allies and partners also be brought in with coordinated actions targeting the Erdoğan government in order to send a more robust and sterner message to Ankara.

The belated US sanctions could have made much more of a difference if they had come earlier, when there was still a free media, a relatively independent judiciary, a daring political opposition and a vibrant civil society. Unfortunately, the Obama administration had merely appeased the Erdoğan regime, bought him ample time with a naiveté that things would eventually play out on their own when neo-nationalist and pro-Iranian elements within the Turkish government were solidifying their positions, dismantling state institutions and destroying the pillars of the secular republic.

It appears Erdoğan has finally found his match in President Donald Trump, who does not seem to be hesitating to directly confront Turkey’s thuggish leader when warranted. Trump’s sternly and publicly critical remarks about Erdoğan and the White House’s exceptionally strong policy against the Turkish government have apparently caught Erdoğan off guard and unprepared in his own game. For a long time Erdoğan and his team thought Turkey was indispensable to a NATO ally and that the US government would eventually acquiesce to the Turkish president’s wishes to persecute his critics including US-based Turkish cleric Fethullah Gülen and accept Turkish overtures to Iran and Russia. Unlike the Pentagon, the State Department bears partial blame in sending wrong signals to the Erdoğan government and emboldening Turkey’s dictator to press ahead and even hold American nationals and local employees of US diplomatic missions in Turkey as hostages. The erroneous reading of Erdoğan by people sitting at the Turkey desk of the State Department has contributed to the mess we face in Turkey now.

Eventually Trump came out and said enough already and launched targeted sanctions to send a clear message that the thuggish and threatening behavior of the Erdoğan government would no longer be tolerated. I’m still surprised to see some Turkey observers who advocate the view that Trump has in fact played into Erdoğan’s hands and handed him an excuse to scapegoat the US for domestic economic problems. For one, Erdoğan would have blamed the US — the Jewish lobby in particular and the West in general — for his government’s failure in economic and fiscal policies even if the Trump administration had not imposed sanctions and taken other measures such as doubling steel and aluminum tariffs for Turkish imports and reviewing Turkey’s eligibility for the Generalized System of Preferences (GSP), which provides easy access to the US markets for certain products. He had done so before, during anti-governmental protests in the summer of 2013, and has often invoked the same argument since then whenever he feels the heat from economic woes.

Incriminated in major corruption investigations in 2013, Erdoğan shifted the debate from the courts to the streets instead of addressing them through legal channels in order to survive. He was able to hush up serious charges by framing the legal probes as a coup and orchestrated the removal of judges, prosecutors and police chiefs. When he faced political challenges in the June 2015 election when his ruling Justice and Development Party (AKP) lost the majority in parliament for the first time in 13 years of rule as a single party government, Erdoğan fought his political battle in the security and intelligence fields by ordering his henchmen to stage false flag terrorist acts, often blamed on either the Islamic State in Iraq and the Levant (ISIL or Daesh) or the outlawed Kurdistan Workers’ Party (PKK).

Changing the rules of the game when it appears he is losing in politics, the legal field and the economy has been the modus operandi of the Erdoğan regime. So far that is how he has survived. Now he is doing it again with the economic woes against the backdrop of a free fall in the value of the Turkish lira. His remarks suggest Erdoğan wants to shift the field again from economic and fiscal platforms to the political arena so that he can fight off his self-perceived demons instead of tackling the root problems of the Turkish economy. The problem he is having now, however, is that he cannot exert control over external dynamics that have an impact on the economy, making him more frustrated than ever.

Another argument I hear from some pundits is that the collapse of the Turkish economy won’t bring down the Erdoğan government. I beg to differ with this as well considering the fact that Erdoğan came to power in November 2002, a year after he established the AKP, on the heels of domestic economic crises that wiped out most of the established parties on both sides of the political spectrum. Perhaps in a twist of fate it would be the same problem that will eventually force him from power. In any case, the popularity of Erdoğan’s AKP mainly comes from delivering services, substantial social aid and economic performance. The Islamist and nationalist ideologies may be important for his base but do not really matter for the masses who fundamentally care about their budget. It won’t take more for them to turn against Erdoğan when they really start feeling the pinch from economic troubles. Bogeyman rhetoric and scapegoating won’t cut it for the Turkish electorate, not for long, anyway.

In the meantime, the factions within the ruling AKP may be emboldened enough to take on Erdoğan as well when they see the president is weak and struggling to pull together the sinking ship. Many heavyweights within the party, marginalized and sidelined by Erdoğan, already feel a huge grudge against him for monopolizing power and handing control of the party and the government to his family members. I’m sure they’re all waiting for the right moment and opportunity to take out the buried hatchets to axe the power of Erdoğan’s family and circle of friends. Surely even with the targeted sanctions, the entire nation may have to pay the price for Erdoğan’s excesses, but that may be the only way to save Turkey, where free and fair elections are no longer possible and institutional checks and balances have been completely destroyed.

Let’s also remember that Turkey is neither Russia nor Iran when it comes to the fundamentals of its economy. It does not have hydrocarbon resources to fuel the economy and lacks technological knowhow and high-tech equipment to sustain its manufacturing base. Its hospitality and tourism industry needs a good country reputation to keep attracting visitors. To a great extent, the Turkish economy, which is running a high current account deficit and has a huge private debt stock, relies on outside trade, investment and tourism, without which it would be impossible to turn the wheels of the economy.

Even if the economic pressure and targeted sanctions do not succeed in bringing Erdoğan down, they will certainly limit the damage he may be inflicting on Turkey, its allies and its partners. Erdoğan has long sought a confrontation with the US on a wide range of issues, while the US preferred to maintain dialogue and engagement in the hope of keeping Turkey anchored to NATO values and goals. In the meantime, not only have political and diplomatic relations between the two countries suffered, but also the military-to-military relationship, which used to be a solid one, has taken a huge beating after a massive purge of pro-US and pro-NATO officers from the Turkish military. Deep suspicions continue to hamper the spirit of cooperation in bilateral meetings that are no longer constructive, honest and results-oriented.

In the end, Erdoğan gets his wish with the Trump administration, which is worried about the long-term consequences of Erdoğan’s destabilizing behavior, opting to play hardball with Turkey’s leadership.

It may not be as pleasant as Erdoğan had hoped it would be.