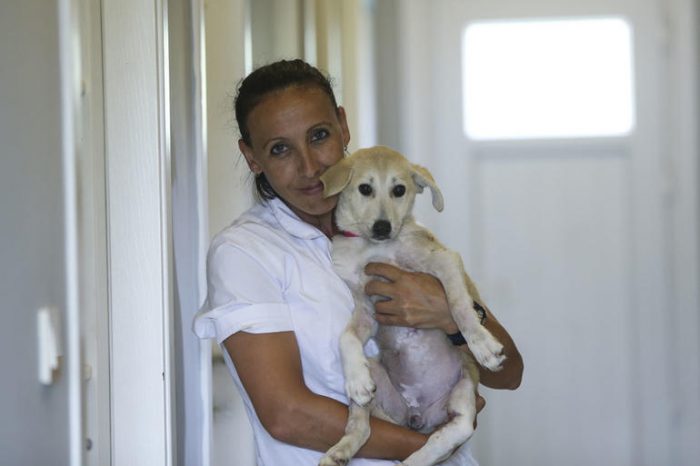 A stray puppy brought from the southeastern province of Mardin to Istanbul in early July for emergency surgery after two of its legs were injured in a shotgun attack is now recovering, Hürriyet Daily News reported.

The three-month-old puppy, named Kuzey (North) by the veterinarians, was shot in Mardin’s Mazıdağı district on June 24 by a 75-year-old man.

After receiving emergency care at the Animal Rehabilitation Center in Mardin, Kuzey was transported to Istanbul by air as he required surgery at a fully equipped veterinary clinic.

The puppy stood the chance of losing two of his legs because the bones in its left legs were shattered, compounded by an infection.

During a successful operation, the bone and muscle tissues of the puppy’s legs were repaired, but the 12 bullets in its body could not be removed.

As of Tuesday, the bandages on the puppy’s legs had been removed.

Following a lengthy antibiotic treatment for the infection, Kuzey now is in good condition and can use three of his legs, the vets said. The dog can only partially use his injured front left leg but is now able to walk slowly, they added.

Kuzey will undergo another operation in the coming days as the bones in its back left leg were damaged. The plan is to graft the bones, according to the vets, taking bone from the puppy’s ribs and grafting it onto his leg bones.

Tamer Saka, a veterinarian at the Istanbul Veterinary Medical Center, said the treatment would be accelerated as the puppy has successfully fought off the infection.

“The left front leg recovered quickly. We can use it. As there is no undamaged bone in the back leg, we can’t use that right now. We plan to graft the bone but will make a final decision during the operation. All in all, Kuzey’s treatment is going very well,” he added.