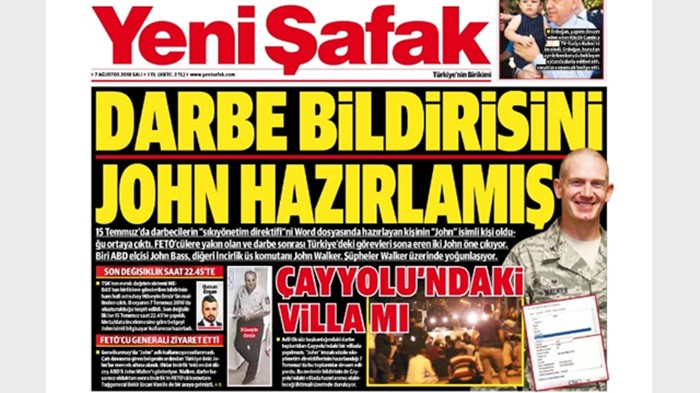 The pro-government Yeni Şafak newspaper on Tuesday wrote that a coup memorandum of July 15, 2015 was written by a person named “John,” claiming that it could refer to either then-US ambassador to Turkey John Bass or Col. John Walker, then-commander of the 39th Air Base Wing at Incirlik Airbase in Turkey’s Adana province.

According to the daily, digital information obtained from an e-mail saved by noncommissioned officer Hüseyin Ömür shows that the martial law memorandum was first prepared on July 7 and that final changes were made on July 15 at 22:45. The memorandum was prepared by a user named “John,” and the investigation showed that no such user existed at the time at Turkish military headquarters.

Underlining that it is a new document showing the US was behind the failed coup attempt on July 15, the daily claimed Turkish officials who are investigating the case directed attention to the names of John Bass and Col. John Walker. Based on his relationship with Turkish putschist Gen. Bekir Ercan Van, the then-commander of Incirlik Air Base, and the content of the memorandum, Turkish officials are focusing on Col. John Walker, the daily wrote.

The story came days after a group of Turkish lawyers applied to the Adana Chief Public Prosecutor’s Office for the arrest of members of the US military at Incirlik Airbase in Adana over their alleged cooperation with the faith-based Gülen movement in the coup attempt. The 60-page criminal complaint names Col. John C. Walker, Col. Michael H. Manion, Col. David Eaglen, Col. David Trucksa, Lt. Col. Timothy J. Cook, Lt. Col. Mack R. Coker, Sgt. Thomas S. Cooper, Sgt. Vegas M. Clark and others deployed to İncirlik Base and asks for their detention.

The Turkish government accuses the Gülen movement of orchestrating the failed coup, although the movement strongly denies any involvement.

The lawyers’ attempt came days after a US decision to impose economic sanctions on Turkey’s Interior Minister Süleyman Soylu and Justice Minister Abdülhamit Gül for their role in the detention of American pastor Andrew Brunson.

The US decided to impose the sanctions after Turkey refused to free Brunson, who was last week moved by a Turkish court from pretrial detention, in which he has been held since October 2016, to house arrest in İzmir but barred him from leaving the premises or the country.

Following the court ruling US President Donald Trump and Vice President Mike Pence threatened to impose “large sanctions” on Turkey if Brunson were not freed.