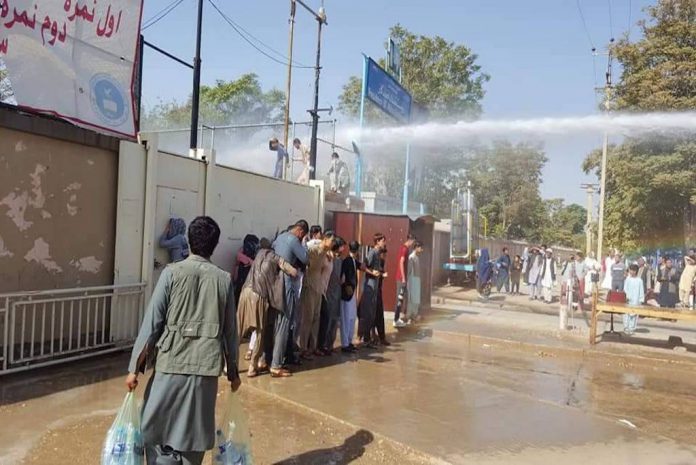 The Afghan-Turk Boys High School in Shibirghan was raided by members of the Afghan security force early Saturday morning, detaining Turkish teachers and dozens of students and their parents in order to seize the school at the request of the Turkish government.

The security forces were under the command of Uzbek leader Abdul Rashid Dostum, the controversial first vice president of Afghanistan and a close friend of Turkish President Recep Tayyip Erdoğan.

The school was surrounded by Dostum militia who did not allow anyone to enter or leave the school premises. According to the school administration, no legal justification has been provided so far, and the militia used violent measures to contain the protesting students and teachers.

A reliable source told the Stockholm Center for Freedom (SCF) that the governor of Jowzjan province together with the police chief would join the raid on both the Afghan-Turk Boys High School and the Afghan-Turk Girls High School in Shibirghan city at 6:00 a.m. local time on Saturday.

Turkish officials and the Turkish Embassy in Kabul have continuously targeted the schools and its staff over the past few years. The unlawful and politically motivated measures taken  in recent months against the Afghan-Turk Schools have been perpetrated by the Turkish government.

It was claimed that Turkish President Erdoğan made a secret deal with Dostum, who returned from Turkey to Afghanistan last week. The raid on the school today is taking place in Uzbek-dominated Jowzjan province.

In April 2018, the Turkish embassy was also involved in another provocative raid on a school affiliated with the Gülen movement in Mazar-e Sharif, a city in northern Afghanistan, but failed when locals mobilized to protect the school and its staff. Parents collected 1 million signatures in a petition against the transfer of the school to Erdoğan’s Maarif Foundation.

Schools that are close to the Gülen movement in Afghanistan operated under Afghan-Turk ÇAĞ Educational NGO, have won 875 awards in international science Olympiads from 2003 through 2016 — 278 gold, 287 silver and 310 bronze medals.

The Taliban shut down these school in 2001, but they were re-opened in the post-Taliban era and often received praise for contributing to rebuilding the future of Afghanistan. Some 10,000 children including 2,000 girls are enrolled in the schools.