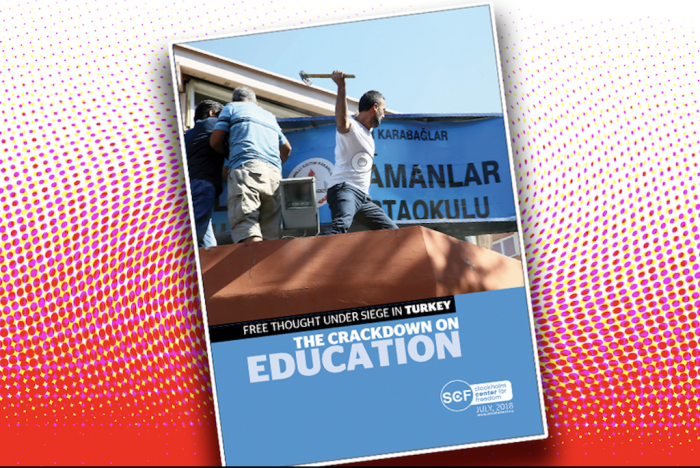 A crackdown on critical thinking in Turkey with an unprecedented witch hunt targeting teachers, academics and other professionals in the education sector has dealt a huge blow to free thought in the country, according to a report released by the Stockholm Center for Freedom (SCF).

The government of President Recep Tayyip Erdoğan has jailed some 20,000 instructors and arbitrarily fired 34,185 public school teachers and 5,719 academics including professors from state universities within the last two years alone, according to the report. They were branded as “terrorists” and “coup plotters” without any effective administrative or judicial probe and as such marked for life.

“This has been the single most lethal assault on free thought, critical approach and analytical thinking in Turkey in the history of the Turkish Republic,” said Abdullah Bozkurt, the president of SCF, an advocacy group that tracks rights violations in Turkey. “The mindset of Afghanistan’s Taliban and Africa’s Boko Haram is very much alive in Erdoğan’s Turkey,” he added.

SCF notes that the government shut down 1,069 privately run schools, most of which were the nation’s best performing science schools and were affiliated with the Gülen movement, and closed down 15 universities that were run by privately held foundations. As a result, 2,465 academics and 54,350 teachers instantly became unemployed. With the support staff who worked in these schools, the total number of people who lost their jobs reached 65,214. The government also cancelled the licenses of 22,474 teachers, making it impossible for them to continue working as teachers in other institutions.

According to the report, 96,719 teachers and academics in total were purged from Turkey’s public and private educational institutions, not including the support staff that was hired to run schools and universities in administrative and other capacities.

Most of the shuttered institutions were transformed into religious schools that are designed to raise a new generation of Islamist supporters for Erdoğan’s Justice and Development Party (AKP).

When all the closed institutions are taken into account, the total loss in value including fixed property and land is around $100 billion, one source estimates. The crackdown included foreign students who came to Turkey for study and Turkish students who were sent abroad on government scholarships.