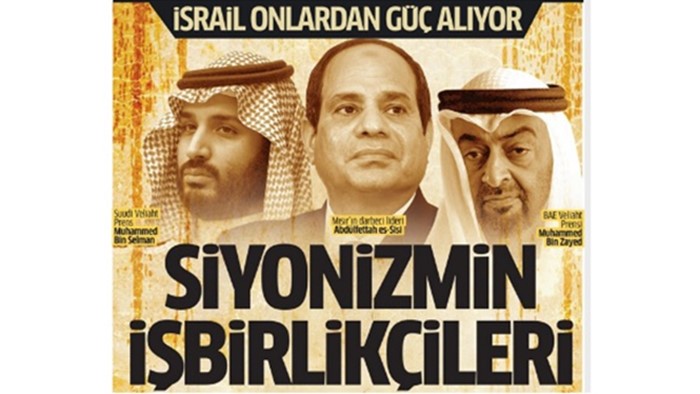 Using photos of bin Salman, al-Sisi and bin Zayed in its front page story, the daily claimed that “Saudi Arabia, Egypt and the UAE openly, and some other Arab states indirectly, support Israel’s nation-state bill and have closed their eyes to the legitimizing of the Zionist occupation.’

The daily noted that Turkey openly opposed the bill, while Jordan and the Arab League confined themselves to weak reactions.

The Star daily, which is owned by a businessman close to Turkish President Recep Tayyip Erdoğan, also underlined that the three leaders had united in order to keep Turkey away from Jerusalem and therefore from helping the Palestinians.

İbrahim Kalın, spokesperson for President Erdoğan, strongly criticized the Israeli bill in an article published Daily Sabah, which is run by the Erdoğan family.

“With the new bill, the Zionist plan to eradicate the Palestinian people and land from the face of the earth enters a new phase,” wrote Kalın.

“With the full backing of the Trump administration, the Netanyahu government shamelessly seeks to legalize occupation and antagonize the entire Muslim world.”