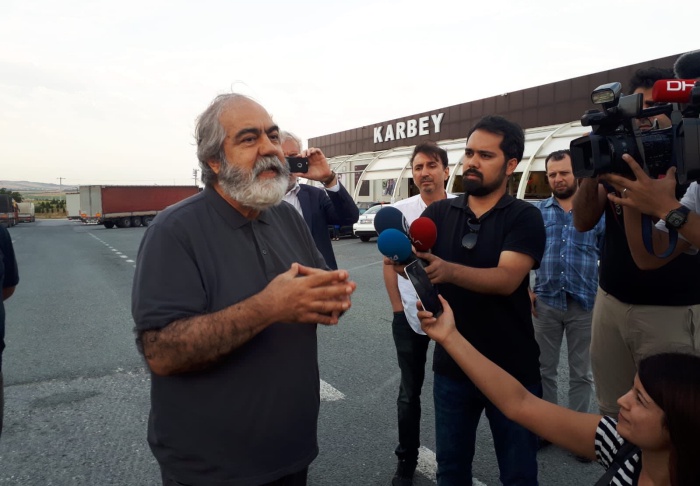 Mehmet Altan, a journalist and economist who had been jailed after a coup attempt in Turkey on July 15, 2016 for almost two years, has told English PEN that the international community should examine the legal status of every incarcerated journalist in the country and publicize as a show support for them.

“The implementation of the universal rules of law in Turkey will bring freedom to imprisoned journalists as well as putting an end to all other forms of injustice,” Altan said in an interview published on Thursday on the organization’s website when asked how PEN English could support writers behind bars in Turkey.

“It might perhaps be helpful if the legal status of each incarcerated journalist would be examined and publicized by looking into his/her specific case file.”

“A permanent solution can be achieved through concrete legal regulations that will prevent arbitrary linkages between terrorism and media activities.”

Altan was first detained on Sept. 10, 2016 on accusations of laying the groundwork for the military coup through a TV program and arrested by a court along with his brother Ahmet Altan, a prominent novelist and journalist.

He was released on appeal in June after being sentenced to life in prison four months ago, although both the European Court of Human Rights and Turkey’s Constitutional Court had ruled that his imprisonment had violated his right to security and liberty as well as freedom of expression.

PEN English asked Altan whether he had been expecting his release.

“I believed that once the law began stirring again that my victimisation would be somewhat resolved,” Altan said.

“Still, waking up from a nap to the joyous screams of my cellmates and finding out from the TV news that I was to be released was a huge surprise.”

His brother Ahmet Altan, on the other hand, is still among the hundreds of journalists behind bars in Turkey.