Turkey’s stocks and bonds slid for a second day and the lira approached a two-week low amid growing investor unease over President Recep Tayyip Erdoğan’s expanded grip over the economy, Bloomberg reported on Wednesday.

Local markets declined as a report showed that the nation’s current-account deficit widened to $5.9 billion in May, exceeding the $5.3 billion estimated by economists in a Bloomberg survey. Turkey’s large external financing needs leave its assets exposed to shifts in investor sentiment and tightening global monetary conditions in the world’s largest economies.

The yield on 10-year Turkish government bonds jumped 44 basis points to a record high of 18.05 percent, after Tuesday’s 54 basis point surge. The benchmark stock index dropped 1.7 percent, adding to the previous session’s 3 percent plunge. The lira fell as much as 1 percent to 4.7535 per dollar.

Erdoğan, who was sworn in Monday as Turkey’s first executive president with expanded powers, appointed his son-in-law as the nation’s chief economic policy maker and assumed exclusive power to name the central bank governor. That is fueling investor concern that the new administration may not steer the economy on a sustainable path.

“Mr. Berat Albayrak has a history in the finance sector in terms of both theory and practice. In the sense that our friend has such a history, I believe he will fix it quickly and maintain it with success,” Erdoğan told reporters about his appointment of Albayrak to the post after his first trip to Azerbaijan since the elections on June 24.

The president holds the unorthodox view that lower interest rates help slow inflation. Investors and analysts say the economy needs to cool and that monetary policy needs to remain sufficiently tight to tame consumer-price increases that are running at more than three times the central bank’s target.

In a separate analysis, on the Turkish lira’s free fall after the announcement of the new cabinet, Bloomberg also said: “Is this a currency crisis? That depends on how you define it. There’s very little liquidity and a new normal of 5 lira per dollar looks to be on its way.”

“The fate of Turkey is entirely in Erdogan’s hands. And that’s what’s worrying investors.” 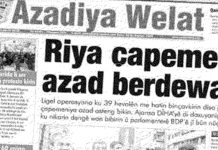