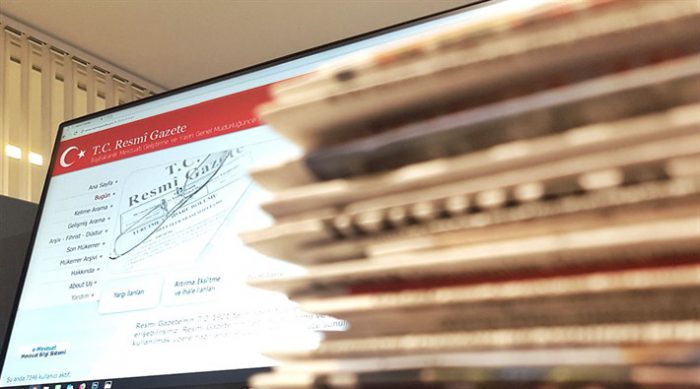 The Turkish government on Sunday issued a decree-law firing 18,632 civil servants due to their alleged ties to “terrorist groups” and closing 12 associations, three newspapers and one TV station.

The 701st government decree, the last to be issued during a state of emergency in force since July 20, 2016, was published in the Official Gazette on Sunday.

According to the decree 148 civil servants were reinstated to their jobs, while one Turkish citizen studying abroad on a government scholarship was expelled from the program.

A total of 3,077 of the sacked personnel were from the Turkish Land Forces Command, while 8,998 were from the police department, 1,126 from the Naval Forces, 1,052 from the Justice Ministry, 649 from the Gendarmerie Command, 240 from the Directorate of Religious Affairs, 192 from the Coast Guard Command, 38 from the Foreign Ministry and 31 from the Interior Ministry.

The decree dismissed 199 academics, some of whom were among the signers of the Academics for Peace initiative, which called on the Turkish government to halt military operations in the country’s Southeast, which resulted in hundreds of deaths and some hundred thousand displaced people.

Among the closed newspapers, Özgürlükçü Demokrasi had been seized by the government in March when trustees were appointed to the board. Özgürlükçü Demokrasi, an İstanbul based daily, was the successor of Özgür Gündem, which was closed by a decree in October 2016 over “terrorist propaganda.”

Halkın Nabzı, an İstanbul-based daily established in 2013 whose editor-in-chief, İshak Karakaş, had been briefly detained over his protest against a Turkish military offensive in Afrin, northern Syria, was also closed down.

Most of the closed associations were affiliated with the Furkan Foundation, whose leader, Alparslan Kuytul, a fierce critic of the ruling Justice and Development Party (AKP), was recently jailed.

The assets of the closed associations and media outlets were transferred to the Treasury.

With the latest decree, the total number of dismissed civil servants now exceeds 160,000 since the coup attempt on July 15, 2016.

On Friday the 700th government decree was issued in order to adopt a new executive presidential system of governance that was narrowly passed in a referendum last year. According to the decree, “Presidency” replaces “Prime Ministry” in all existing  legislation, and “President” instead of “Prime Minister” or “Cabinet” now appears.

Critics regard the changes as an official declaration of one-man rule, while some government officials have said that with such powers, newly re-elected President Recep Tayyip Erdoğan does not need to extend a state of emergency that allows for exceptional police measures and governance by decree and which has been in place since the coup attempt in July 2016.