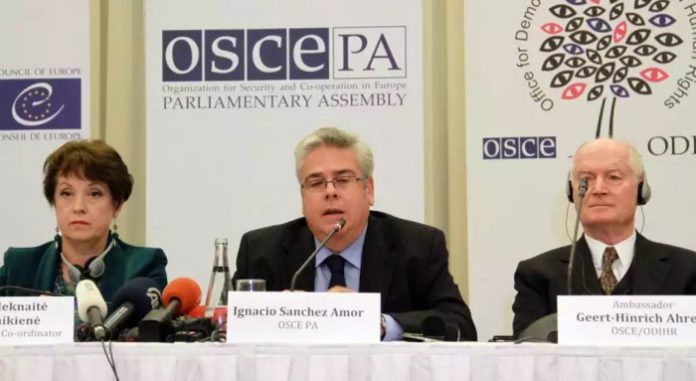 Opposition parties were denied equal conditions for campaigning in Turkey’s June 24 elections, and the incumbent president and ruling party enjoyed undue advantage, including in the media, Reuters reported on Monday, citing the Organization for Security and Cooperation in Europe (OSCE).

“The restrictions we have seen on fundamental freedoms have had an impact on these elections. I hope that Turkey lifts these restrictions as soon as possible,” said Ignacio Sanchez Amor, head of the OSCE short-term observer mission in Turkey.

But observers from the rights body praised the high participation of Turkish citizens in the elections, saying they had demonstrated their commitment to democracy. Turnout in Sunday’s polls was around 87 percent.

“In the 24 June early presidential and parliamentary elections, voters had a genuine choice despite the lack of conditions for contestants to compete on an equal basis. The incumbent president and his party enjoyed a notable advantage, also reflected in excessive coverage by government-affiliated public and private media,” the OSCE’s preliminary conclusions report said about Turkey’s elections.

During the elections on Sunday, 326 observers from 43 countries had been deployed to monitor the voting process.

“The restrictive legal framework and powers granted under the state of emergency limited fundamental freedoms of assembly and expression, including in the media. Still, citizens demonstrated their commitment to democracy by participating in large numbers in campaign rallies and on election day,” the report said.

“I can confirm that … three German citizens were arrested,” foreign ministry spokeswoman Maria Adebahr told a news conference. “I cannot confirm that these were election observers in the sense of being members of the OSCE mission,” she added.

The fourth German citizen, a businesswoman, had been released and was not banned from leaving the country, she added.