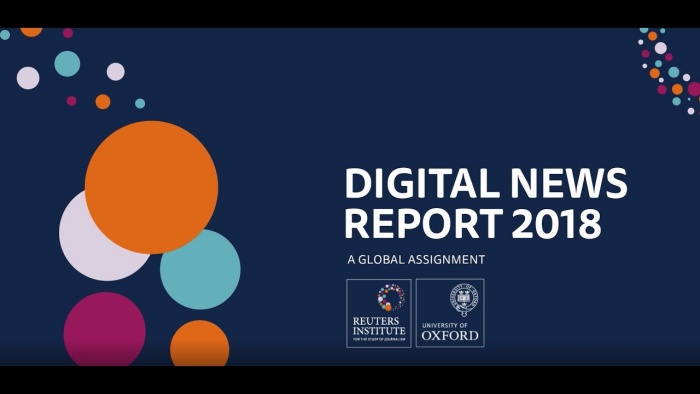 Pro-government Turkish media outlets such as the Sabah daily, aHaber TV and public broadcaster TRT have the lowest trust among people who are simply aware of them, while media outlets that take a more critical line, such as FOX, Cumhuriyet and Sözcü, are more trusted, according to the Reuters Institute Digital News Report 2018 published on Thursday.

According to the section on Turkey, which was written by Servet Yanatma, a visiting research fellow at the Reuters Institute for the Study of Journalism (RISJ), 40 percent of Turks distrust the news, a figure which for the first time exceeds that of the percentage of people who trust the news (38 percent). According to the report, the increasing level of distrust shows the extent of media polarization in Turkey.

The report states that traditional media brands using content repackaged from print or television or from news agencies and digital-born web portals that aggregate stories from the same sources continue to represent the most popular sources of online media.

There are a number of smaller digital platforms that serve as alternatives to mainstream media, the report says. However, these alternative platforms have not yet established sustainable business models and lack the resources to employ full-time reporters experienced in investigative journalism. Those brands, which try to reach their audiences through social media, are followed mostly by educated people living in metropolitan areas.

Two-thirds of the urban population in Turkey uses social media to access news, while many are switching to closed messaging apps like WhatsApp to discuss the news, according to the report.

The Turkey section of the report is as follows:

Media Freedom in Turkey has deteriorated over the last year with further intimidation of journalists, new laws to restrict internet broadcasts, and the sale of a leading media group to a pro-government businessman.

Turkey has been under a state of emergency since a failed coup attempt of July 2016, which has enabled the ruling AK party to gradually strengthen its control over the media. Independent watchdog Freedom House has classified Turkey as ‘not free’ for the first time this year.

First, at the suggestion of the ruling party, a law on internet broadcasting was introduced, requiring online video streaming services to apply for a licence from the regulator, RTUK. Access can be blocked if the permits are not secured. RTUK checks the content, and has the power to issue fines. Opponents say the government is tightening controls ahead of planned elections, with powers to block and remove content from news sites and social media already being used. As five of the nine members on RTUK’s governing council are appointed by the ruling party, critics argue that the licensing mechanism itself is likely to be abused by the government.

While the content of the law is open to discussion, a leading expert, Yaman Akdeniz, says: ‘Every Turkish media service provider with internet media services operating from outside Turkey will be subject to licensing.’ In theory any journalist or individual who posts a video on the internet will also need a licence.

This is likely to affect alternative news providers, since most of the news outlets which can criticise the government are online, and the internet is the main news source for people who oppose the government. Live streaming through Periscope and YouTube have increasingly become popular for free media like Medyascope TV and Özgürüz. DW Turkish also increased its content on YouTube by hiring several experienced Turkish journalists. Some independent journalists such as Ünsal Ünlü stream regular live news shows as well. Perhaps as a result, news usage of YouTube (+9) and Twitter (+10) has risen significantly in the past year.

Another related development is the sale by Turkish media mogul Aydın Dogan of all his media outlets to Demirören Holding, a pro-government conglomerate with interests primarily in energy and construction. Dogan Media owned the top-selling Hürriyet daily, CNN Turk, a nationwide news agency, TV channels, radio stations, and the Yay-Sat distribution network. In a phone conversation with then Prime Minister Tayyip Erdoğan in 2014, a recording of which was leaked, the owner of Demirören Group was apparently reduced to tears and apologised for a critical article in his newspaper.

Opposition figures have said the sale creates a ‘big monopoly’ in Turkish media, and it is widely seen as being likely to further limit the free press. Veteran journalist Kadri Gürsel tweeted: ‘By this huge takeover including Hürriyet, Turkish mass media industry comes under the direct political control of President Erdoğan.’ It is significant to note that the Dogan Group was larger than Demirören when the ruling party came into power in 2002.

For the first time this year, our data now show trust scores for individual news brands. It is striking that pro-government outlets like Sabah and Ahaber, and public broadcaster TRT have the lowest trust among people who are simply aware of them, whereas media that take a more critical line such as FOX, Cumhuriyet, and Sözcü are at the top.

Traditional media brands using content repackaged from print, television, or from news agencies, and digital-born web portals which aggregate stories from the same sources continue to represent the biggest online media. Apart from them, there is only one digital-born brand (Onedio) in the top online media list.

Beyond mainstream media, there are a number of smaller digital-born brands that continue to operate freely, providing alternative perspectives. These include OdaTV, T24, Diken, Duvar, Bianet, Medyascope TV, Ahval News, which is funded by Al Arab Publishing, Journo, and ArtıTV. However, they have not yet established sustainable models, and cannot afford to employ full-time experienced reporters for investigative journalism.

They are mostly accessed by the educated people in the big cities, and they try to reach other audiences through social media, particularly Facebook which is the most popular platform in the country.