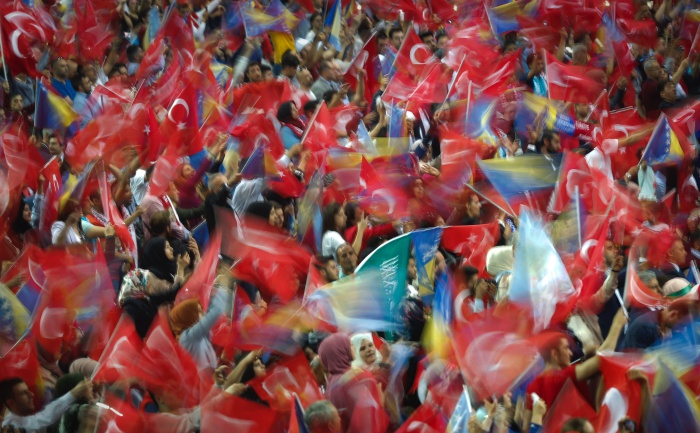 In the upcoming June 24 presidential and parliamentary snap elections, I have little hope that the opposition will score a win in an entirely unfair campaign with limited access to the media, the collapse of the independent and impartial judiciary for legal challenges, the partisan actions of the election commission and the absence of a power broker such as the military to ensure the ground rules are respected in the peaceful transfer of power through democratic channels.

It is true that most Turks including many supporters of autocratic President Recep Tayyip Erdoğan have tired of 16 years of rule by his Islamist Justice and Development Party (AKP), which has been marred by corruption, economic troubles and growing repression. Voters may be less receptive to Erdoğan’s campaign promises, which are based on more of a rhetoric and ideology than performance and substantive issues such as problems in rising household debt, unemployment and inflation. Yet, Erdoğan is believed to have already secured contingencies to make up an apparent loss in public support by fixing the elections with massive irregularities already planned in various stages of the process, from setting up polling booths to vote tallying.

Although the opposition was successful in putting up two serious contenders with great oratorical skills and charisma to appeal to voters, namely center-left politician Muharrem İnce of the main opposition Republican People’s Party (CHP) and right-wing nationalist Meral Akşener of the Good Party, it has already started to suffer from a series of complicated troubles. For one, opposition candidates have failed to define the campaign theme and generally follow the lead of Erdoğan by focusing on issues that the AKP government put out in the public domain backed by a mammoth media propaganda machine in the hands of the governing party.

Popular Kurdish opposition presidential candidate Selahattin Demirtaş is currently imprisoned and out of the game, while the pro-Kurdish Peoples’ Democratic Party (HDP) is prevented from running an effective campaign amid a crackdown and wave of arrests. Erdoğan is planning to push the HDP out of politics with a high 10 percent national threshold for parties to enter Parliament and therefore is banking on getting some 60 seats in Parliament that would otherwise go to the Kurdish party. Both İnce and Akşener have been adding more fuel to the fire lit by Erdoğan to discredit the HDP and help the Turkish president isolate the third largest party in Parliament.

The opposition is also making a huge mistake by adopting Erdoğan’s narrative instead of focusing on their own talking points and therefore are falling to distance themselves from Erdoğan. Both İnce and Akşener are competing with the incumbent president in escalating an anti-Western diatribe with an unprecedented bashing of Turkey’s long-time allies, especially the United States, when they know such language does not serve Turkey’s national security interests at all. Yet, they have jumped on the bandwagon of the ruling party in undermining the nation’s strategic needs. On the mass persecution of Gülen followers, they offer no glimpse of hope either in stopping or in reversing this great injustice. On the Kurdish problem, they also resort to the same statist and nationalist approach as if similar, decades-old policies have not complicated the problem further.

The AKP stalwarts’ barrage of attacks and relentless defamation campaign against the opposition is also intended to keep the opposition on the defensive and catch them off-guard and off-balance. It is also part of their election strategy to suppress the talk of growing economic troubles, which is a major vulnerability for Erdoğan during the election campaign. The nationalist and Islamist ideology is deliberately being pushed onto the public agenda by Erdoğan and his cronies to deflect the discussion away from issues such as the deficit in democracy, human rights violations, the state of emergency, good governance, corruption and economic woes.

The opposition has to run an aggressive campaign to close the gap with the ruling AKP, and this may involve new techniques and innovative methods. It should not allow Erdoğan to act like he is an opposition figure and must prevent his attacks on past wrongdoings by the opposition. His party has been running Turkey for the last 16 years, and it should be judged on its own record as well as that of its leader Erdoğan. Judging how the opposition has fared so far on these points, there is not much to be hopeful about for the future. They also play into Erdoğan’s hands by contributing to the deepening polarization in Turkish society and helping him marginalize stigmatized groups such as the Kurdish minority and the Gülen community. The opposition slogan of ending divisiveness does not really match what the opposition candidates have been preaching on the streets. Nominating radical figures to the election ticket did not help the opposition out, either.

On foreign policy, Erdoğan is deliberately risking a confrontation with Turkey’s allies, friends and trading partners, and he is raising the temperatures well beyond acceptable limits for politicians who naturally cater to their domestic constituencies. Even hearing Foreign Minister Mevlüt Çavuşoğlu, his lackey and supposedly top diplomat, going ballistic on foreign relations by publicly spouting all kinds of conspiracy theories as if they were fact shows how desperate the AKP is to sustain its regime. Erdoğan’s anti-Jewish diatribe, which went beyond legitimate criticism of Israeli government policies, from the expansion of settlements to the oppression of the Palestinians, was intended to stir up emotions, fuel national euphoria, consolidate Erdoğan’s support base, increase turnout and compensate for voter fatigue stemming from four elections and a referendum since 2014. Unfortunately, the Turkish opposition has bought into Erdoğan’s manipulation of the Palestinian issue. The same can be said about troubles with neighboring Greece as well.

In the event the opposition ekes out a victory at the ballot box in this election by a small margin, Erdoğan can easily fix that during vote counting, tallying, registering votes in the electronic network and certifying the results. The opposition has neither the resources nor the absolute dedication to make sure vote counting is done properly and truthfully. They also do not have a contingency plan to escalate the matter if irregularities are detected. In the contested 2014 mayoral election in Ankara and Erdoğan’s controversial razor-thin edge in the 2017 presidential referendum, the main opposition CHP failed terribly in mounting political and legal challenges against the ruling party. Most of their election monitors left the polling places early, while no serious pressure was applied to the Supreme Election Board (YSK) to invalidate the results.

Despite all these challenges, the opposition may stage a come-from-behind win over Erdoğan if economic woes have eaten away a significant chunk of the ruling party’s support and if the margin of difference is too big for Erdoğan’s cronies to fix. In that case, a smooth transfer of power would not be possible, and the AKP might clog democratic channels by plunging the country into a deeper conflict. Erdoğan may very well mobilize paramilitary troops to stoke the conflict, plot more false flags with terrorist acts and hope to weather the ensuing political crisis by staging a comeback as he did during the June 2015 general election, when his party lost its parliamentary majority for the first time in the 13 years of its rule. He did not allow formation of a coalition by the opposition and instead dragged Turkey into a snap poll in November 2015 to restore his rule and regain the majority amid a series of terror incidents that many believe was the work of Turkish intelligence.

It is clear that if Erdoğan gets ousted from power, it would not be because of the performance of the Turkish opposition, but rather because of a combination of a series of mistakes made by the AKP government and a radical shift in dynamics, such as economic troubles that will eat away at the AKP’s support base. Let’s recall that Erdoğan came to power in 2003 after a domestic economic crisis wiped out most of the established political parties and may very well exit from politics if another serious economic crisis hits the nation, whose economy is very much dependent on trade and foreign direct investment. To what extent Turkey’s allies and partners are willing to challenge Erdoğan on the international legitimacy of his corrupt government will play a critical role in the fate of the country in the event things don’t pan out the way Erdoğan has planned for the elections.