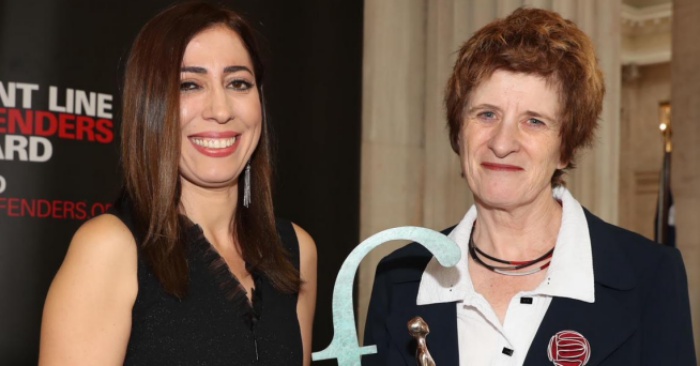 UN Deputy High Commissioner for Human Rights Kate Gilmore presented Baysal with the award during a ceremony at Dublin’s City Hall on Friday.

Baysal has been documenting the human cost of the return to conflict in Turkey’s Southeast and has endured threats, intimidation, violent raids on her home and detention, but still has not stopped writing, said Ahval.

“The human rights defenders we’re honoring today work in some of the most dangerous areas of the world, sacrificing their own security to peacefully demand justice and human rights for their communities,” Andrew Anderson, executive director of Front Line Defenders, said at the awards ceremony.

In addition to her writing Baysal has been involved in the founding of several NGOs, set up a camp for Yazidi women who have escaped the Islamic State in Iraq and the Levant (ISIL) and has been a strong voice for peace in the region.

“As governments and corporations work to delegitimize and defame human rights defenders’ peaceful work, activists around the world tell us that international visibility and recognition is a critical protection tool,” Anderson said.

“The award demonstrates that these defenders have the support of the international community, that their sacrifices have not gone unnoticed and that we stand in solidarity with their unrelenting bravery.”

Journalist Baysal gave a speech after accepting the award, arguing that the international community did very little to help the Kurdish people, who have been confronted with violence.

“Today in Turkey, academics, students, journalists, teachers, doctors, even wedding singers, who criticize government policies, who demand peace and human rights, can easily be declared terrorists. We are being killed, put in prison and forced to leave the country. Demanding peace is seen as a crime of terrorism in Turkey. People like me who demand peace and human rights are declared terrorists. Do I look like a terrorist?” Baysal said.