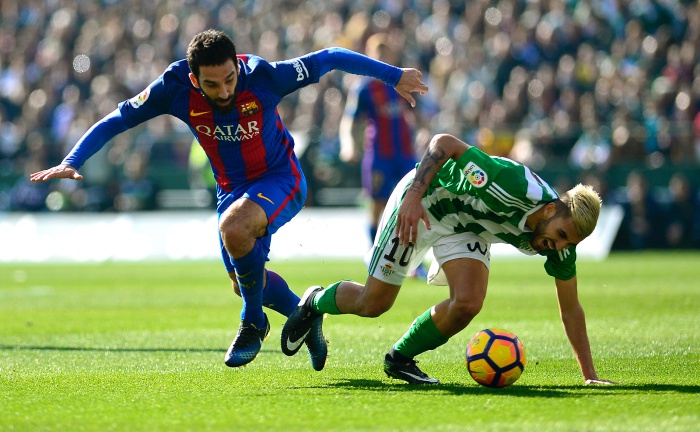 Arda Turan, a 31-year-old Barcelona footballer on loan to İstanbul’s Başakşehir football team, hit a career low by bullying the referees in a match between his team and Sivasspor on May 4.

When his frustration came to a head, the referee showed him a red card, which resulted in Turan, Turkey’s most famous midfielder, being banned for 16 games of professional football. According to the rules, such punishments above four games are enforceable worldwide.

It was also a blow to Barcelona’s plans to sell its disappointing star to another team. Due to his unexpectedly low performance at Barça, Turan has missed lots of matches in the last three seasons, playing only 36 games. After Barcelona struggled to sell Arda, Turkey’s Başakşehir, a “pro-government” football club, got in line to bring him back home.

Arda’s move to Başakşehir was interpreted as a sign of his closeness to Turkish President Recep Tayyip Erdoğan, since he openly supports the team. In March, Erdoğan was a witness at Turan’s wedding. Erdoğan, a former semi-professional football player himself, has always had good relations with Turkish athletes. In 2017, just before a referendum proposing an executive presidency in Turkey, some footballers including Turan publicly supported the government.

Turan’s closeness to the ruling Justice and Development Party (AKP) was also scrutinized in his historic move to Barcelona. When he was transferred from Spain’s Atletico Madrid to Barça in 2015, Atletico Chairman Enrique Cerezo implied that sponsors wanted Arda to move to the Catalan team, which had had an advertising agreement with the government-controlled Turkish Airlines (THY) since 2010. The move put him playing alongside Lionel Messi, a name that everybody knows in Turkey, considered a good PR strategy for THY, Turan and the AKP that he supports.

Still, Turan was a success story in Spain while playing for Atletico Madrid. Coach Diego Simeone built a team of warriors, and Turan, who was both a promising star and a problem child at Galatasaray, was well suited for the action. Arda told reporters that he learned how to play in Spain after spending just a year with his new team.

His fierce ambition on the field made him a brilliant football player, but that was also his Achilles heel. There was a match against Barcelona during which he threw his cleats at the referee. As he had been a frantic footballer himself, Simeone tolerated Arda’s misbehavior and created a passionate team leader. THY’s efforts aside, Turan’s move to Barcelona was not an awkward decision, thanks to his excellent performance.

His fall started when he missed the chance to prove himself in Barcelona. Last summer, the Catalan team attempted to sell Arda but was unable to seal the deal. During this interruption to his rise as a footballer, Arda became more antagonistic towards the Turkish media and even attacked a sports journalist on June 6, 2017 while travelling with the Turkish national football team.

In mid-season, Turkey’s Başakşehir acquired him on loan from Barça in order to strengthen the team in its bid for the championship. In April President Erdoğan called on his ruling Justice and Development Party’s (AKP) youth branches to fill Başakşehir’s stands, while the team had a chance of winning the title.

The team’s curious story was covered by the Financial Times on March 29 with the headline, “Political football: ‘pro-government’ club shakes up Turkish league.” According to FT, the club is subsidized by the local municipality run by the AKP, and Başakşehir’s chairman is also a relative by marriage to Erdoğan.

Turan’s red card not only hurt his career but also blew Başakşehir’s dreams to become the Turkish league champion. Only last year, Arda gave an interview to Turkish sports daily Fanatik, while he was still playing for Barcelona, saying: “Look up the football history of our country. Someone like me only comes along once in a hundred years.”