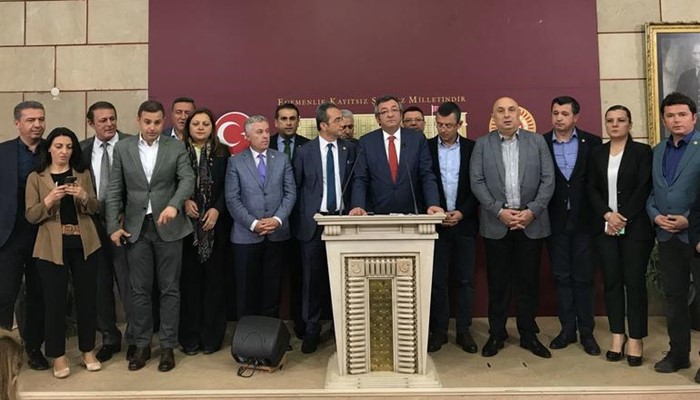 Fifteen deputies who resigned from the main opposition Republican People’s Party (CHP) and joined the İYİ (Good) Party on April 22 as part of a tactical move to enable the new party to run in snap presidential and parliamentary elections on June 24 have returned to the CHP.

“The 15 have returned home after fulfilling their duty,” said Engin Özkoç, the CHP’s deputy parliamentary group chairman during a press conference with the 15 deputies and Aytunç Çıray, secretary-general of the İYİ Party, in Ankara on Thursday.

Çıray thanked CHP Chairman Kemal Kılıçdaroğlu and the 15 deputies for their contribution to the fight for democracy.

Turkey will hold snap presidential and general elections on June 24, a year and a half earlier than originally scheduled.

The four parties‘ alliance does not apply to the presidential election, in which each will field their own candidate.

As a result of a referendum in April 2017, Turkey switched from parliamentary system to a presidential system of governance.

On June 24, Turkey will for the first time elect a president under the new system.

Turkey’s Supreme Election Board (YSK) announced on May 9 that a total of six candidates would compete in Turkey’s presidential election.

Incumbent President Recep Tayyip Erdoğan is the joint presidential candidate of the Justice and Development Party (AKP) and the Nationalist Movement Party (MHP). The CHP presidential candidate is deputy Muharrem İnce, that of the pro-Kurdish Peoples’ Democratic Party (HDP) is jailed HDP deputy Selahattin Demirtaş, the İYİ Party will be represented by Meral Akşener, the Felicity Party (SP) by Temel Karamollaoğlu, and the Vatan Party is putting forward the party’s leader, Doğu Perinçek, as its presidential candidate.