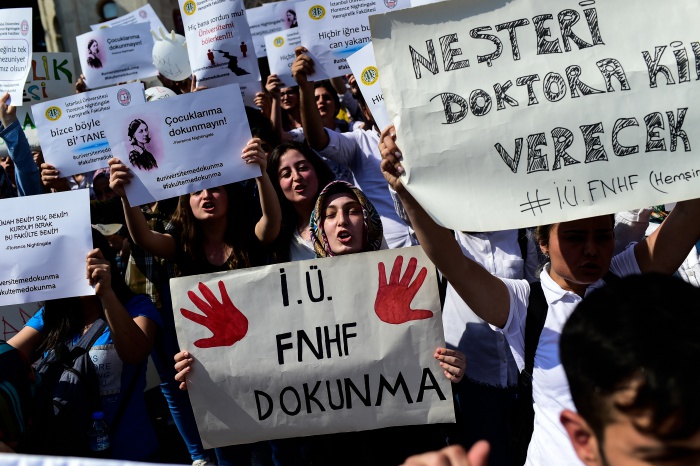 Istanbul University students and academics continued a weeks-long protest on Tuesday in Beyazıt Square against a bill submitted to the Turkish Parliament to split up 10 Turkish universities, including Istanbul, the Hürriyet Daily News reported.

At about 12:30 p.m., hundreds of students and academics gathered at the historic main gate of the university, chanting slogans and carrying banners that read “Do not touch my university and faculty,” “Beyazıt is ours, it will stay that way” and “Do not split up my university.”

The first address to the gathering was made by Turkish Medical Association (TTB) Chairman Raşit Tükel, who called for the bill in question to be withdrawn from Parliament.

“By giving speeches here today, by calling on Parliament, we are once again raising our objections. We want members of Parliament to hear our voice. We will continue to make efforts [to stop this from happening],” Tükel was quoted as saying by the Doğan news agency.

Prof. Dr. Tamer Demiralp from Istanbul University’s faculty of medicine, also spoke on “the importance of multidisciplinary research in the training of academics.”

Demiralp said the bill in question was “splitting a sycamore,” which is “impossible to accept,” the Birgün daily reported.

“As students and academics holding various views, as information laborers, as the components of the university, we are here today to take a joint decision for it not to be split up. We are at this forum so our scientific and intellectual history will not be destroyed. This is an example of a participant university,” Arcan said in her talk titled, “The concept of the participating university and decision-making processes at the university.”

A press statement was released following the speeches. “This bill has no scientific, objective or consistent justification. This bill is not for the public benefit. As the components of Istanbul University, we call on the Turkish Parliament to withdraw this bill. Until the bill is withdrawn, we will show our determination to continue our struggle,” it read.

For weeks, university students and academics around Turkey have been protesting the government’s bill to split up 10 universities, including the historic Istanbul University.

Prof. Dr. Mert Savrun, vice rector of Istanbul University and a faculty member of the Cerrahpaşa School of Medicine, resigned from his post in protest of the proposed legislation.

Some 5,000 academics have also signed a petition against the bill.