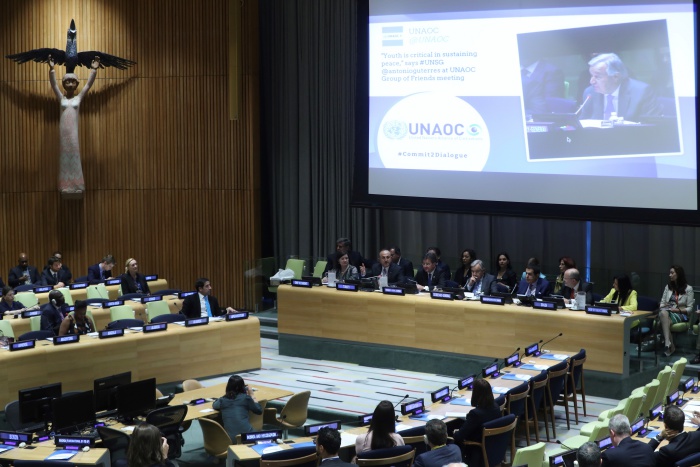 The United Nations Alliance of Civilizations (UNAOC) indefinitely postponed an event at the UN on Thursday to observe World Press Freedom Day after the News Literacy Project (NLP) refused UNAOC’s request to remove references in their presentation to several countries where press freedom is limited, Alan Miller of NLP reported.

The references are in videos from a new lesson on international press freedoms that was to be introduced at the event. The videos include remarks about severe restrictions on press freedom in Turkey, Mexico and Egypt and comments by Russian and Pakistani journalists describing the challenges they face.

According to Miller, NLP submitted the presentation to UNAOC on Monday so it would be ready to be shared with the audience. A UNAOC official then asked NLP to delete the reference to Turkey — which, along with Spain, had proposed the creation of UNAOC in 2005 — and the official later insisted that NLP not share any of the video clips.

“I could not permit this censorship of our presentation due to the stated concern that it would offend one or more countries engaged in repression and violence against journalists. We at NLP find UNAOC’s decision particularly ironic because the event was to celebrate World Press Freedom Day. We had not discussed prior review of our presentation with UNAOC and would not have agreed to participate if it had been asked,” Miller wrote.

In an email on Wednesday, UNAOC told the panelists and more than 150 registered attendees that the long-planned event was being postponed “until future notice” because of another event at the UN scheduled at the same time, despite the fact that the events were planned well in advance.

Turkey is ranked 157th among 180 countries in the 2018 World Press Freedom Index released by Reporters Without Borders (RSF) on April 25. If Turkey falls two more places, it will make it to the list of countries on the blacklist, which have the poorest record in press freedom.

Turkey is also the biggest jailer of journalists in the world. The most recent figures documented by the Stockholm Center for Freedom (SCF) show that 258 journalists and media workers were in jail as of April 29, 2018, most in pretrial detention. Of those in prison 199 were under arrest pending trial while only 59 journalists have been convicted and are serving their time. Detention warrants are outstanding for 142 journalists who are living in exile or remain at large in Turkey.

Detaining tens of thousands of people over alleged links to the Gülen movement, the government also closed down about 200 media outlets, including Kurdish TVs and papers, after a coup attempt in Turkey on July 15, 2016.