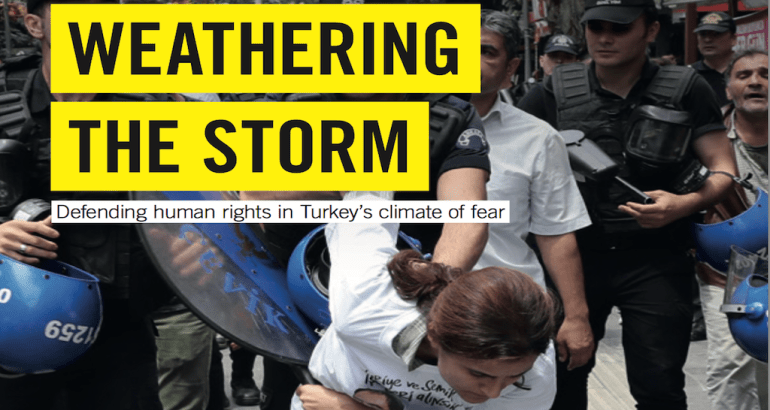 “A chilling climate of fear is sweeping across Turkish society as the Turkish government continues to use the state of emergency to shrink the space for dissenting or alternative views,” Amnesty International said in its latest report on Turkey and urged the Turkish government to release Taner Kılıç and other human rights defenders and civil society actors held under anti-terrorism laws and without credible evidence of any criminal wrongdoing.

Releasing a report titled “Weathering The Storm Defending Human Rights In Turkey’s Climate of Fear” on the ways in which the rights to freedom of expression, assembly and association, to liberty and security and to fair trial have been eroded in Turkey, Amnesty International underlined that especially “those who are defending human rights are on the front line – both as the targets of authorities’ attacks and at the heart of courageous resistance to attempts to silence all opposition.”

While Turkey’s jailing of journalists and activists has hit the headlines internationally, the impact on wider society may be unquantifiable but no less real, said Gauri van Gulik, Amnesty International’s Europe director. “Under the cloak of the state of emergency, Turkish authorities have deliberately and methodically set about dismantling civil society, locking up human rights defenders, shutting down organisations and creating a suffocating climate of fear.”

Under the state of emergency, “the rights to freedom of expression to liberty and security and to fair trials have been decimated,” van Gulik said, adding, “In so doing, the last line of defence for any healthy society – namely the work of human rights defenders – has been breached.”

According to Amnesty, “Repressive measures were initially directed at those suspected of participating in the coup attempt including journalists, followed by academics, judges and prosecutors. While these attacks have continued, the net has widened to focus increasingly on the relatively small but vibrant independent civil society in Turkey.”

The report explained that the state of emergency, bolstered by over 30 executive decrees that bypassed parliamentary and judicial scrutiny, provides the context and legal opportunity for a worsening crackdown on civil society, an unprecedented wave of detentions and prosecutions, and the erosion of fair trial rights in Turkey.

These decrees have seen over 150,000 dismissed from their jobs, more than 100,000 face prosecution and some 1,300 NGOs shut down, according to the report. Those who defend human rights or who exhibit dissenting views have been particularly targeted, in what Amnesty International calls “a deliberate and widespread attack.”

Human rights are being eroded in Turkey. Although issues existed prior to July 15, 2016, the coup attempt and subsequent state of emergency have led to an abolishment of freedom of expression, freedom of assembly and freedom from arbitrary arrest, detention and imprisonment.

The report said under the state of emergency, over 1,300 NGOs have been shut down without valid cause. There are no effective avenues to challenge these closures; a State of Emergency Commission has been established to hear appeals, but it is inefficient and non-impartial. To date, the commission has only approved 310 out of 10,010 finalized cases, a 3 percent success rate. There are almost 100,000 cases still under examination.

Dismissals and closures have exacerbated the issues involved with defending Kurdish rights. This has long been a dangerous job, but now, as Amnesty International states, “The few remaining independent voices advocating for human rights in the [Kurdish] region live with an even more severe, ever-present threat of detention and prosecution.”

For instance, JINHA, a news outlet for Kurdish women, was shut down by emergency decree, and the editor, Zehra Doğan, was imprisoned. Raci Bilici of the Human Rights Association Diyarbakir branch was dismissed from his teaching job and is currently facing imprisonment. In 2017, Bilici was targeted by the pro-government newspaper Akit, leading to threatening phone calls. These smear campaigns against human rights defenders have become common under the state of emergency. Along with pro-state media, state authorities have also accused these people of being “terrorists,” “defenders of the coup,” “unpatriotic,” “foreign agents,” “spies” and “enemies of the state.” This labeling not only leads to threats and violence but also removes the presumption of innocence and can result in social exclusion.

Both Doğan and Bilici were prosecuted under vague anti-terrorism laws that have been used to criminalize dissent and erode freedom of expression. In addition to 189 media outlets being shut down via decree, journalists and editors have been charged under Article 7/2 of the Anti-Terrorism Law, which references “disseminating propaganda for an armed terrorist organisation.”

Moreover, Amnesty International’s own Taner Kılıç and İdil Eser are facing terrorist organization membership charges. Kılıç has been accused of using the ByLock messaging application, a baseless charge that, even if true, should not amount to terrorism. Eser was arrested along with nine other prominent human rights defenders (known as the İstanbul 10) while holding a human rights workshop. As Amnesty’s report articulates, this sends a clear message: “Criticism of rights violations will not be tolerated.”

Arbitrary arrest, detention and imprisonment are being used to maintain this climate of fear in Turkey. The mass purge of lawyers and judges, a disregard for constitutional court decisions and various other problems reflect a system that is unpredictable and entirely political. Countless human rights defenders, like the aforementioned, have been held arbitrarily. Arbitrary detention has also been used to silence dissent, such as criticism of Turkey’s military operation in Afrin.

According to the report, by Feb. 26, just over a month after the Afrin operation commenced, 845 people had been detained for social media posts; 643 people were subject to judicial proceedings; and 1,719 social media accounts were under investigation.

A case example given by Amnesty is that of the Turkish Medical Association (TBB), a professional body of 83,000 physicians. After the TBB released a statement calling for an end to the Afrin operation, its headquarters were raided as were the homes of its Central Council members. Eleven members are now facing criminal investigation, and detention has spread to those who showed support for the TTB on social media.

The right to freedom of assembly has also been repressed throughout Turkey’s history, further eroded by the state of emergency. A ban on public demonstrations in Diyarbakır has been in place since August 2016. For three consecutive years, Pride (LGBTI) events have been banned in İstanbul and Ankara. Those who defy the ban have been met with excessive force by police, with dozens arrested.

In November 2017, state of emergency powers were used to ban a German LGBTI film festival in Ankara. Just days later, Ankara then announced an indefinite ban on all events by LGBTI organizations. Another ban was imposed in İstanbul November 2017 on a march and demonstration by LGBTI organization Pink Life. These bans impede the work of LGBTI rights defenders, and encourage homophobia and transphobia.

Amnesty stated in the report that “At a time of widespread human rights violations, the vital work of civil society activists, including human rights defenders, is being curtailed by the authorities’ use of arbitrary detention and prosecution, threats of violence and intimidation, the closure of organizations and the banning of public events. Articles in pro-government media and attacks on social media targeting civil society actors in smear campaigns are often a precursor for arrest or prosecution. As a result, sections of society most at risk of human rights abuses – such as women and girl survivors of sexual and gender-based violence, LGBTI people, refugees and migrants – are denied crucial support and solidarity as they struggle to defend their rights. The climate of fear that exists leads to self-censorship, with activists being afraid to speak up because they might be thrown in jail or attacked for what they said.”

Amnesty also calls on Turkish authorities to end the state of emergency and related draconian measures. They must release all human rights defenders and civil society members, reopen NGOs and refrain from further prosecutions. Authorities must also stop using smear campaigns and investigate any threats made against human rights defenders and other civil society members. Human rights are vital to any society, and targeting defenders has wide-reaching implications for all those at risk of rights violations.

“It is time for Turkey to lift the current state of emergency and the draconian measures that came with it that go beyond legitimate measures to combat threats to national security, before there is no independent, critical civil society left in Turkey. The Turkish authorities must ensure the release of human rights defenders and other civil society actors, who have been detained and prosecuted in the absence of credible evidence, and refrain from prosecuting anyone in the future for their legitimate human rights work. The authorities must roll back the climate of fear and intimidation by positively recognizing human rights and all who stand up for them. The international community must use all its powers and influence to reverse the downward trend of human rights in Turkey.”