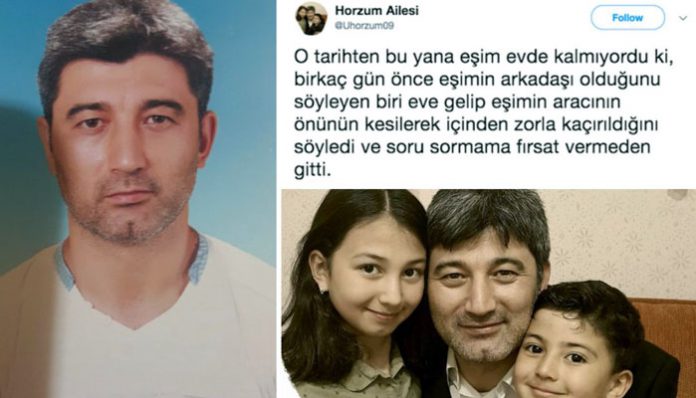 Journalist Erk Acarer has claimed that Ümit Horzum, a former civil servant who was found 133 days after he went missing in Ankara, was tortured and is still being subjected to maltreatment under police custody.

Horzum, who was removed from his job at the Turkish Accreditation Agency (TURKAK) by a government decree issued last year due to his alleged links to the Gülen movement, was one of 11 people who have mysteriously disappeared since a failed coup attempt on July 15, 2016.

The Turkish government accuses the Gülen movement, inspired by the views of US-based cleric Fethullah Gülen, of masterminding the failed coup, although the movement strongly denies any involvement.

Horzum was reportedly found on April 17, after which the police informed his wife, Aynur, that her husband was in police custody. Yet, according to the family’s Twitter account, neither his family nor his lawyer has been allowed to see Horzum.

According to Acarer, who wrote from his Twitter account on Friday, Horzum is being held in custody at the Ankara Police’s Organized Crime Department and sustained broken ribs and a burst eardrum after he was brought there.

The journalist said Horzum was not found in Ankara’s Ümitköy neighborhood as claimed and that the man could only say he was transferred from one vehicle to another and taken to a place he’s unable to identify.

The journalist also said there are claims of Horzum being tortured at the police department and that he is being forced to sign a 100-page deposition.

“His detention period has been extended for seven days. Torture is a crime against humanity,” wrote the journalist.

Horzum’s wife, who wrote about the claims concerning her husband, tweeted on Friday that she felt indescribable pain when she learnt the claims that her husband’s ribs were broken and his eardrum burst due to torture.

She said his lawyer is not allowed to see Horzum and she wonders how a 100-page-long deposition could have been drafted given that Horzum was only detained on April 7.

Fethullah Gülen strongly denied having any role in the failed coup and called for an international investigation into it, but President Erdoğan — calling the coup attempt “a gift from God” — and the government initiated a widespread purge aimed at cleansing sympathizers of the movement from within state institutions, dehumanizing its popular figures and putting them in custody.