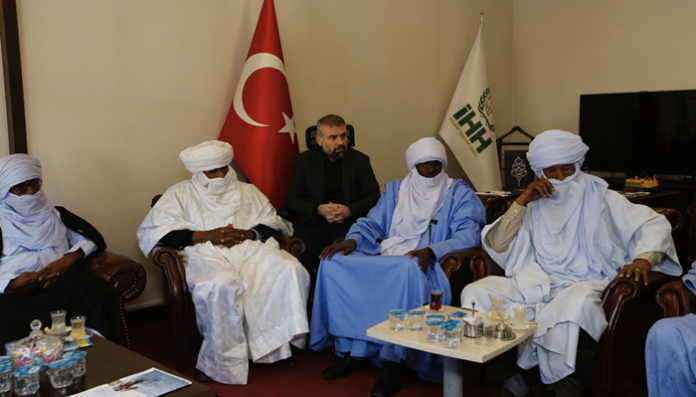 Islamist President Recep Tayyip Erdoğan, who helped destabilize Syria by supporting al-Qaeda-linked groups in Syria including the Nusra Front has been courting the Tuaregs for some time to create a new proxy group to promote his policies in the Sahel and North Africa regions, a worrying pattern that should raise red flags.

A visit to Turkey of 10 Tuareg sheikhs and leaders from Libya that started on April 1 is the latest example of a series of contacts that have been arranged by operatives of Erdoğan as part of efforts to woo the Tuaregs in recent years. The goal is to use Tuaregs — who enjoy considerable control over vast swaths of empty desert that are often exploited by kidnappers, drug traffickers and radical Islamists — for advancing the policies of the current Turkish government in general and the personal ambitions of the Turkish president in particular. Just like Gaddafi, who once manipulated the Tuaregs for his own policies, influence over the Tuaregs may provide Erdoğan with a new set of tools to blackmail a few African countries including Libya, Mali, Algeria and Niger and to hit back at Western allies.

The man who is in charge of the Tuareg file in the Turkish government is Emrullah İşler, the point man who Erdoğan has trusted with managing Libyan affairs since he was deputy prime minister in the previous government. İşler made several trips to Libya as a special envoy, often meeting with Islamist faction leaders as well as others. He was dubbed an apologist for the Islamic State in Iraq and the Levant (ISIL, ISIS or Daesh with its Arabic acronym) when he said ISIL is more humane because at least it does not torture its victims. He currently serves as chairman of the parliamentary Commission on Education, Youth and Sports. He was one of the planners of the visit of the Tuareg delegation to Turkey.

The Tuaregs’ schedule included meeting with İbrahim Kalın, an Islamist ideologue who works in the palace as Erdoğan’s spokesperson. He was rumored to be the next chief of Turkish intelligence agency MİT. On behalf of his boss, Kalın coordinates the activities of most Islamist groups abroad, often meeting with them in Ankara in order to advise and guide their operations. When the Turkish government hired shadowy lawyer Robert Amsterdam to go after Erdoğan’s main opponent, Fethullah Gülen, and his network of schools, Amsterdam was told to connect with Kalın to coordinate clandestine operations in Africa. According to verified email leaks from Erdoğan’s son-in-law Berat Albayrak, Kalın was to provide contacts and resources developed by the Turkish government in Africa for the use of Amsterdam and his associates. This notorious lawyer even filed a frivolous lawsuit against Gülen in the US based on a complaint from al-Qaeda-affiliated Turkish group Tahsiyeciler, a group that is supported by Erdoğan, only to be tossed out by a US judge.

While the official Turkish government contacts with the Tuaregs are handled discreetly by İşler and Kalın, the second track contacts are maintained by a controversial charity group, the Foundation for Human Rights and Freedoms and Humanitarian Relief (İnsan Hak ve Hürriyetleri ve İnsani Yardım Vakfı, or IHH, in Turkish). The IHH, backed by Erdoğan and working closely with Turkish intelligence, was accused of smuggling arms to jihadist groups in Syria according to United Nations Security Council documents. The IHH was also involved in moving supplies to al-Qaeda groups in Syria according to a two-year-long confidential investigation file that was made public in January 2014. The Albayrak emails revealed how the IHH has been acting as a contractor in shipping arms to Libyan factions since 2011.

When the Tuareg delegation landed at İstanbul Atatürk Airport at 11 p.m. on April 1, it was IHH representatives led by member of the board of directors Ahmet Sarıkurt who met the group in the VIP section. Among the delegates was Moulay Iqdeedi Amaa Quineedi, president of the Libyan Supreme Tuareg, who has been a participant in tribal reconciliation efforts maintained by a Rome-based NGO called the Ara Pacis Initiative. Ahmad Matku Neenu Moustafa, Tuareg tribal sheikh, and Aboulbakr Alfaqi Anqidazin Abkidah, chairman of the Tuareg Cultural Assembly, were among the members of the delegation. On the first day of their weeklong stay in Turkey, the Tuaregs visited IHH headquarters to discuss Libyan matters.

As part of the program, on April 6, historian Fnayet Alkoni, a Tuareg who accompanied the delegation, delivered a speech on how the Tuaregs had helped expand Islam in Africa at an event organized by the IHH and the theology faculty of Istanbul University. He explained how France is to be blamed for divisions and separation among Tuaregs, who are scattered among several African countries. Because of 1960s nuclear arms experiments conducted by France in places where Tuaregs live, the environment was damaged, diseases were spread and underground water sources were contaminated, he noted.

To consolidate his position in the Sahel and North Africa, it is clear that Erdoğan has been courting the Tuaregs, who once enlisted their help with Libyan strongman Gaddafi in exchange for the use of Libyan territory for a rear base from which to organize, train and run operations in neighboring countries from Mali to Niger. Erdoğan offers political, diplomatic and military support that the Tuaregs need, given the state of affairs in the region, especially in Libya. Turkey’s strongman Erdoğan might have found new allies in this part of Africa just like he did in Syria, where he funded and armed diverse groups, from the Muslim Brotherhood to al-Qaeda factions. Considering how Syria was destabilized with Turkish Islamist intervention, one should be very concerned about the prospect of Erdoğan closely aligning with the Tuaregs in order to advance his caliphate ambitions in the Sahel and North Africa regions.

A confidential source I talked to from Africa last week expressed a different concern on these developing relations with the Tuaregs. He said a criminal syndicate in the Sahel was largely run by Tuareg tribes and that Erdoğan may very well use them to abduct his opponents, more specifically members of the Gülen movement, from African nations and kidnap Western nationals to put pressure on Turkey’s allies and partners and stir up trouble to keep them busy in a region that was already troubled with Islamist militants of al-Qaeda and Boko Haram. He said Erdoğan’s growing criticism of France and Ankara’s harsh rhetoric targeting French relations with Kurds in Syria may potentially develop into a proxy war in the Sahel between Turkey and France. Although there is no direct evidence to suggest that this may be happening, it is certainly worth a close monitoring of this front.

In any case, when the profiles of Turkish operatives in the first and second tracks that are involved in the engagement with the Tuaregs are looked at, there are ample reasons to be very much concerned about the prospect of these growing ties with African tribes. By the way, this would also be a great sell to Erdoğan’s core Islamist constituency in Turkey because the Tuaregs would be portrayed as pioneers in expanding Erdoğan’s proselytizing efforts in Africa, just like historian Alkoni told university students in the theology faculty, which trains the nation’s top clerics, imams and academics.