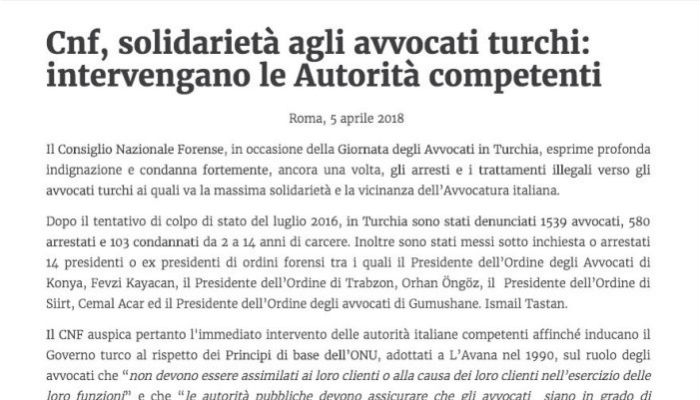 The Italian National Bar Association, Il Consiglio Nazionale Forense, released a statement on Thursday on the occasion of the Day of the Lawyer, marked every April 5 in Turkey, to extend their support for lawyers under arrest in Turkey.

In the statement, the association expressed its solidarity with the Turkish lawyers and called on Italian authorities to urge the Turkish government to abide by its obligations under national and international law with regard to the arrested lawyers.

According to data from the Turkish Bar Association (TBB), 500 lawyers celebrated the Day of the Lawyer in Turkish prisons this year.

Particularly after a failed coup attempt on July 15, 2016, dozens of lawyers were arrested simply because their clients were people who had links to the Gülen movement, which is accused by the Turkish government of masterminding a failed coup in 2016. The movement strongly denies any involvement in the putsch.

The lawyers representing a group of police officers who uncovered government corruption in late 2013 have also been jailed solely because of the identity of their clients.

In addition to the risk of arrest, lawyers also face many obstacles in seeing their jailed clients. Most of the time, they are denied access to their clients for a long period after their detention due to an ongoing state of emergency in the country, which was declared in the aftermath of the coup attempt and is still in effect.