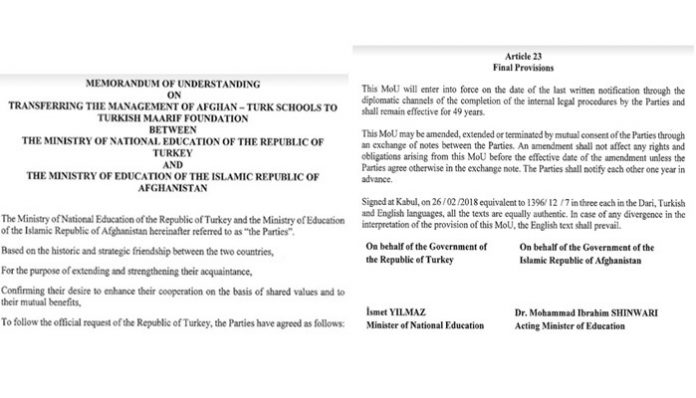 Turkey’s Islamist rulers have succeeded in twisting the arm of the Ashraf Ghani government, which eventually succumbed to pressure from the Turkish president in handing over Afghanistan’s 15 best-performing Gülen-linked schools and education centers to the Turkish government’s Maarif Foundation, which is effectively run by jihadists.

According to a memorandum of understanding (MoU) that was signed in Kabul on Feb. 26, 2018, the price tag for the transfer is an upfront cash payment of $5 million, followed by another $5 million over the next five years. The Turkish government also committed to providing $20 million in development aid for the next 10 years in order to develop and expand Turk-Afghan schools. Of course, the amount of bribery and kickbacks from such a deal is not reflected in the official documents, but rumor has it that some were paid handsomely to make this happen.

The stated goal for this abrupt and unlawful transfer is to improve the quality of education in the schools and overhaul their curriculum in line with international standards. That is, of course, a ridiculous claim for those who know how these schools have performed in the past. I visited these schools both in Kabul and Herat during my travels there to attend conferences organized by Herat Security Dialogue (HSD) in cooperation with the Afghan Institute for Strategic Studies (AISS). I was amazed how they had fared over the years and proved themselves a serious contender in international competitions. I remember mentioning their track record in speeches as a success story in a country that is often associated with war, conflict, drug trafficking, refugees and human rights violations.

When I was there last time in 2015, the number of students was some 7,000, including more than 2,000 girls, in 20 schools scattered around six provinces (today 9,186 students are enrolled in these schools). Leaving many countries behind in tough competitions, Afghan students from Gülen-linked schools have collected 717 awards in international science competitions — 230 gold, 232 silver and 255 bronze. They proved that Afghans can be very competitive given the right tools in education, which provided hope for the future of this country that sits at the heartland of Asia. The words of former Indian Foreign Minister Salman Khurshid, who was at the Herat conference, still echo in my ears today: Education will eradicate poverty in Afghanistan by creating more opportunities for young people, and it will in the end eliminate security concerns and deal with pressing challenges.

Now this success story will soon be over because of Erdoğan’s vendetta targeting prominent Muslim intellectual Fethullah Gülen and his network of schools abroad. For all intents and purposes, they will be turned into madrasa-style schools that will be another version of Taliban-run madrasas and transformed into places for breeding radical and extremist ideologies. That should not be surprising given how Maarif is run by jihadist figures such as Osman Nuri Kabaktepe, the vice president of Maarif, who has served on the board of the controversial charity group Foundation for Human Rights and Freedoms and Humanitarian Relief (İnsan Hak ve Hürriyetleri ve İnsani Yardım Vakfı, or IHH, in Turkish). The IHH, backed by Erdoğan, was accused of smuggling arms to jihadist groups in Syria according to United Nations Security Council documents. The IHH was also involved in moving supplies to al-Qaeda groups in Syria according to a two-year-long confidential investigation file that was made public in January 2014.

With Maarif, Erdoğan is employing the same tactic he used at home after seizing well over 1,000 Gülen-linked science schools. Almost all these schools were turned into religious imam-hatip schools through which Turkey’s Islamist rulers aim to raise a new generation of Islamists to maintain the regime in Turkey. Critical and analytical thinking in these schools was replaced with dogma and total allegiance to Erdoğan’s Islamist ideology. The nationalist euphoria, mixed heavily with religious zealotry, was pumped into young minds, turning them into foot soldiers in the Turkish government’s worldwide campaign of proselytization. They are detached from reality, misguided by conspiracies and harbor hostile feelings towards anybody who does not subscribe to a similar ideology.

Erdoğan’s taking over of the Gülen schools in Afghanistan will also deal a heavy blow to Afghan-driven and Afghan-owned initiatives to rebuild institutions, create a sustainable government and finally bring peace and stability to a nation that has grown weary of war. Although the Turkish-Afghan schools started out as an investment by Turkish businessmen who were inspired by the teachings of Gülen, the schools were later owned by Afghans. Out of some 1,000 staff members employed at these schools, only one-tenth were Turkish nationals when I visited there. This ratio has decreased further in favor of Afghan nationals since then.

Erdoğan and his Islamist associates, who do not hide their affection for Iran’s revolutionary Islamic ideology, have also done Iran a great favor by taking over the Gülen schools and turning them over to pro-Iranian figures in the Maarif Foundation. The Iranian mullah regime already enjoys significant influence in neighboring Afghanistan through schools, mosques, media outlets and NGOs that were used as fronts to promote Iran’s divisive ideology in Afghan society. As a result, not only was an important barrier against Iranian’s clandestine penetration into Afghan society removed but also a new set of educational institutions were indirectly offered to the Iranians on a golden platter.

Among the bizarre commitments made by the Afghan Ministry of Education to the Turkish side in this MoU is the strict use of the names “Turk” or “Turkish school” in Afghanistan in what may be construed as tantamount to blatant intervention in the sovereignty of Afghanistan. This stems from a government decree-law that was issued by the Erdoğan government under emergency rule that banned the use of the word “Turkish” or “Turkish school” without the approval of Ankara. This Turkish law was included in the MoU in a way that any private business in Afghanistan that wants to use “Turkish” in its name must be approved by Afghanistan’s Ministry of Education after consulting with Maarif. In other words, Maarif was placed above the Afghan government in an amazing concession that amounts to turning Afghanistan into a vassal state of Turkey.

The agreement covers the immediate transfer of 12 public schools and three educational centers upon the completion of diplomatic exchanges. Although the Omid-Afghan Turk schools, which are owned by private individuals — some actually Afghan nationals — were left out of the scope of the agreement, the MoU states that a joint commission will be established to determine the status of these schools, paving the way for their transfer to Maarif in the future as well. In the meantime, the Afghan government pledges to prevent these schools from changing their names and establishing new branches. The Afghanistan Ministry of Education also commits itself to consulting with the Turkish embassy before approving teachers to work for these schools. This is a complete disregard of the protections of private property and free enterprise and sets a bad precedent for foreign investors who may be willing to make investments in Afghanistan.

The 23-article MoU, which was signed by Turkey’s Education Minister Ismet Yilmaz and Afghanistan’s Acting Education Minister Mohammad Ibrahim Shinwari, states that the transfer of these schools to Maarif will be valid for 49 years. This is quite a long time to entrust the future of Afghan children to a Turkish government agency. The tradeoff is simply not acceptable given how Erdoğan is keen to promote his poisonous Islamist ideology abroad. The government of Afghanistan is aiding and abetting this ill-advised move for the sake of maintaining good relations with a dictator who is despised by most nations in the world.