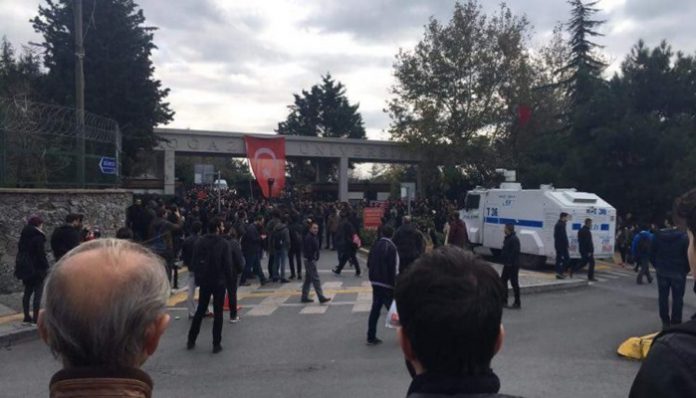 A total of 1,250 academics from more than 100 organizations across 37 countries of the world have signed a petition asking for the release of 15 Boğaziçi University students in Turkey who were detained in March for holding a protest against an ongoing Turkish military offensive in the Afrin region of Syria.

The letter, which was penned by the Academic Solidarity Network, asks the Turkish government for the immediate release of the students, saying the arrests on campus as well as subsequent police raids of student homes and dormitories continue a disturbing trend of criminalizing political speech and dissent in Turkey.

The letter has been sent to Turkish President Recep Tayyip Erdoğan, Turkish government officials, UN and EU officials, the Turkish Embassy in Washington, D.C., and the consulate general in New York as well as to the rector of Boğaziçi University.

On March 19 a group of students protested other students who had set up a stand and distributed Turkish delight in memory of Turkish soldiers killed during the Turkish military’s operation in Afrin. Police identified the protestors and detained 15 of them in separate operations.

In a speech on March 21, Erdoğan targeted the Boğaziçi students who were involved in the Afrin protest and described them as “communists, traitors and terrorists” while he called the youths who had set up stands for slain soldiers “believers, local and national.”

“Those are terrorist youths. We will conduct investigations into them. After identifying them, we will not let them get an education at the universities because a university is not a place for educating terrorist youths. A university educates the generation who will serve their country and nation,” Erdoğan said during a speech at his ruling Justice and Development Party (AKP) congress at Yaşar Doğu Sport Hall in the Tekkeköy district of Samsun.

Erdoğan in January said Boğaziçi University had failed to become a global brand because it “does not rely on national values.”

The academics’ letter reads as follows:

“As members of academic communities around the world, we strongly oppose the recent arrests and harassment of students at Boğaziçi University in İstanbul, Turkey.

“On March 19, 2018, students demonstrated against a campus event supporting the Turkish soldiers who fought in the invasion of Afrin, Syria, which was organized by the Society for Islamic Research (İslam Araştırmaları Kulübü). The arrests on campus, as well as subsequent police raids of student homes and dormitories, continue a disturbing trend of criminalizing political speech and dissent in Turkey.

“President Recep Tayyip Erdoğan has cynically referred to these students as “terrorists”, vowed to expel them from Boğaziçi University, and to deny them the right to study at any other university. We have heard this kind of verbal attack from Erdoğan before and it was followed by the detention of thousands of academics, journalists, artists, and human rights advocates.

“We call upon the Turkish government to immediately release all student detainees.

“We call upon the Turkish government to immediately cease all investigations and arrests of students exercising political speech.

“We express our solidarity with these students, who continue to courageously express their dissent, despite the great risks they face.

“We pledge our support to these students through the public and private means available to us.”