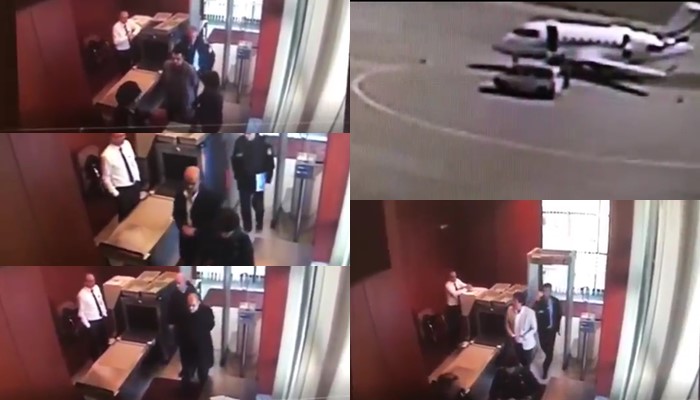 Security camera footage released on Saturday shows five Turkish teachers and a doctor apparently going through security at the airport in Pristina after being abducted by Kosovar police and the Turkish intelligence service in Kosovo.

On Thursday morning Kosovo police arrested six Turkish nationals, one doctor and five educators, working at a group of schools affiliated with the faith–based Gülen movement.

Videos shared on the Internet show that the Turkish nationals were taken through X-ray security accompanied by uniformed Kosovo police on Thursday morning. A private jet is also seen waiting on the apron.

Kosovar journalist Xhemajl Rexha tweeted on Friday that “#Kosovo Police has confirmed to a local news portal that the ‘6 #Turkish citizens were flown to #Turkey, Thursday 29th March, at 11:05 local time’.”

Rexha also tweeted late on Friday: “Tonight KTV reports that #Kosovo Infrastructure Ministry breached the rules by giving a permission with only 24 hours notice to the private jet that supposedly came here for the Turkish citizens. The minister comes from PM’s party. ‘They came for business’ an adviser told us.”

Haradinaj said on Thursday: “The entire operation — revoking their residence permits, detention, emergency deportation and the secret extradition to Turkey of the six Turkish citizens from Kosovo territory — was conducted without my knowledge and without my permission.”

President Hashim Thaci also commented on the developments: “Today we are disappointed because our relevant institutions, for reasons that remain to be clarified to the end, have failed to defend these principles related to the human rights of foreign nationals who live and work in our country. I am informed by the competent authorities after the event that six citizens were deported today to Turkey on the grounds that they did not have a residence permit in Kosovo.”

But Thaci changed his tone on Saturday and said he was informed by the intelligence service that “their arrest and deportation is related to their illegal and dangerous activity in Kosovo.”

He also hinted that he was not pleased with the dismissal of the interior minister and secret service chief.

Turkish President Recep Tayyip Erdoğan on Friday expressed satisfaction with the abduction of six Turkish nationals and vowed to bring all people affiliated with the movement to Turkey in similar operations.

“Our National Intelligence Organization, in cooperation with Kosovo’s intelligence agency, got six high level members of FETÖ [a derogatory term coined by the Justice and Development Party (AKP) government to describe the Gülen movement] in the Balkans and handed them over to our police,” Erdoğan said during a meeting with ruling AKP provincial chairpersons in Ankara.

“Wherever they are, we will package them up and bring them [to Turkey], God willing,” he added.

Leutrim Syla, lawyer for the six Turkish nationals — Cihan Ozkan, Kahraman Demirez, Hasan Huseyin Gunakan, Mustafa Erdem, Osman Karakaya and Yusuf Karabina — said on Friday that his clients would most likely face torture or ill treatment and harsh punishment if they are deported to Turkey.

President Erdoğan and his ruling AKP government pursued a crackdown on the Gülen movement following corruption operations in December 2013 in which the inner circle of the government and then-Prime Minister Erdoğan were implicated.

Erdoğan also accuses the Gülen movement of masterminding a failed coup attempt in Turkey in 2016.