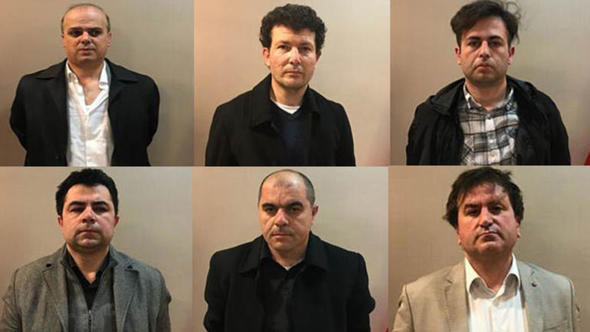 Kosovar Prime Minister Ramush Haradinaj said in a tweet that he was not informed by any state institution about the deportation to Turkey of five educators and a doctor who used to work at Gülen-linked schools in the country.

The six people who were arrested in Kosovo on Thursday were brought to Turkey in a joint operation carried out by Kosovo’s intelligence service and Turkey’s National Intelligence Organization (MİT).

In a tweet on Thursday evening Kosovar Prime Minister Haradinaj wrote: “Today, in the operation conducted by Kosovo Intelligence Agency, 6 Turk citizens have been deported. Myself, as the Prime Minister, was not informed about this operation, therefore I will act according to my legal and constitutional competencies.”

On Thursday morning, Kosovo police arrested six Turkish nationals, one doctor and five educators working at a group of schools affiliated with the faith–based Gülen movement, which is accused by Turkish President Recep Tayyip Erdoğan of masterminding a failed coup attempt in 2016, The Associated Press and Turkey’s state-run Anadolu news agency reported.

A source who has knowledge of the arrests but who declined to be named due to the ongoing operation told the AP that the five individuals were arrested over expired residence permits and would very likely be deported to Turkey.

The Gülistan Education Institutions confirmed the arrests, saying the managers were “mysteriously” taken away.

The arrests took place early on Thursday morning. According to the Kosovo police, three were arrested in Gjakova and two in Prizren.

The Gülistan Educational Institutions operate four Mehmet Akif elementary and high schools in Kosovo. The schools were opened by Turkish entrepreneurs inspired by the views of Islamic cleric Fethullah Gülen, who is accused of masterminding the failed coup on July 15, 2016. Gülen, who has pioneered opening of more than a thousand educational institutions around the world, strongly denies any involvement in the coup attempt.

Months ago, Kosovo police arrested Uğur Toksoy, an educator with alleged links to the Gülen movement. Kosovo has not extradited Toksoy to Turkey, but the ordeal still sent shock waves throughout Kosovo’s Turkish community, some of whom told the Balkan Investigative Reporting Network (BIRN) that they fled to Kosovo hoping to escape Turkey’s crackdown on the press and individuals and groups with ties to the movement.

In the aftermath of the coup attempt, the Turkish government launched a massive crackdown on Gülen followers and arrested more than 50,000 people from all walks of life on the pretext of an anti-coup fight. The government has also removed 150,000 people from state jobs due to their alleged links to the movement.

According to a report on the Prishtina Insight news website, the Gülistan Educational Institution confirmed that the arrestees are: general director Mustafa Erden; vice director Yusuf Karabina; principal of the school in Gjakova, Karaman Demirez; and Gjakova teachers Cihan Oskan and Hasan H. Günakan.

School officials said in a press release that they do not currently know the whereabouts of the arrestees or the reason for their arrest. Nazmi Ulus, director of the Mehmet Akif College in Lipjan, said that all those arrested had resident permits valid until 2022.

“We cannot get the exact information from the police, what we suspect as a reason is Turkey’s pressure on all Balkan countries,” Ulus said.

Kosovo Police spokesman Baki Kelani declined to give further details but confirmed that “police are undertaking an operation.”

Erdoğan’s crackdown on the Gülen movement is not limited to Turkey as he is forcing other countries where Gülen schools operate to close down these schools and deport their employees. Some countries have bowed to Erdoğan’s pressure and closed down the schools operating for years and deported their employees to Turkey despite they face risk of maltreatment and torture.