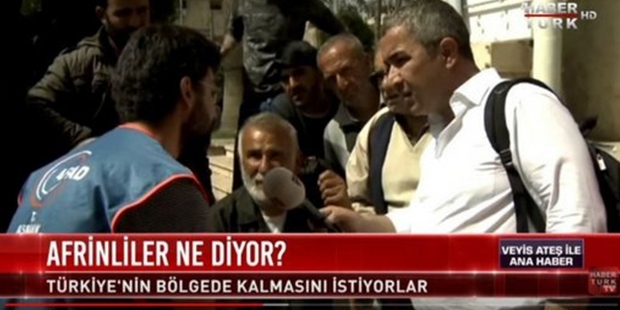 In an apparent move to justify an ongoing Turkish military operation in the northern Syrian town of Afrin, the remarks of several locals who spoke to Turkey’s Habertürk TV station for a special program were mistranslated to the benefit of the Free Syrian Army (FSA).

The Turkish military and FSA fighters on Jan. 20 launched Operation Olive Branch in Afrin against the Syrian Kurdish Democratic Union Party (PYD), which Turkey sees as the Syrian extension of the outlawed Kurdistan Workers’ Party (PKK).

The program, “Afrin Exclusive,” was aired on Habertürk on March 27. During the interviews, the locals complained in Kurdish that the FSA fighters were involved in acts of plunder in the town in addition to harassing women and taking away their valuables.

However, the translator changed the words of the locals as if it were People’s Protection Units (YPG) fighters who were involved in acts of evil in the town.

The manipulation in the translation of the locals’ remarks was brought to public attention by the editors of the Kurdish-language Bianet Kürdi news website on Thursday as well as some well-known Kurdish figures on social media.

The Afrin operation is applauded by the majority of the media in Turkey, which is tightly controlled by the Turkish government.