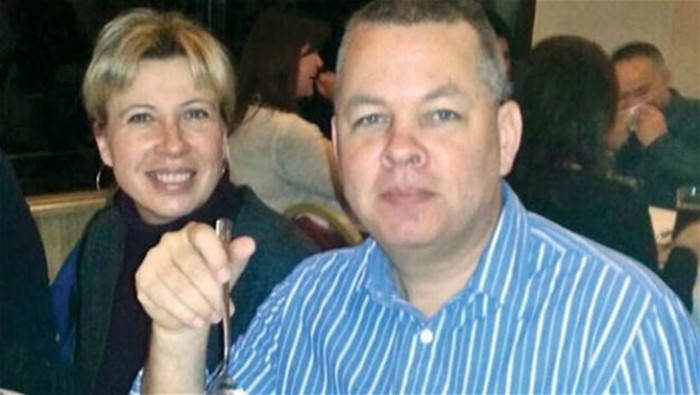 A Turkish prosecutor on Tuesday demanded life imprisonment for American pastor Andrew Brunson, who has been jailed in Turkey since October 2016, over alleged links to a failed coup attempt in July 2016, the Doğan news agency reported.

Brunson, who was jailed due to suspected ties to the faith-based Gülen movement, was charged with acquiring secret political and military information, attempting to destroy the constitutional order and overthrow the government.

“We continue to have serious concerns … about cases against US citizens who have been arrested under the state of emergency,” Tillerson said, referring to the emergency rule that has been in place since July 2016.

“We call upon Turkey to release Pastor Andrew Brunson and other US citizens who we believe are being unjustly detained.”

A North Carolina native, Brunson has been in custody since October 2016 after he and his wife were detained on immigration violation charges. At the time, the Brunsons were running a small Christian church in İzmir. They had lived in Turkey for 23 years.

Brunson’s wife, Norine, was soon released, but the cleric remained in custody and soon saw his charges upgraded to terrorism. Prosecutors have suggested in court hearings that Brunson is being held on suspicion of being a follower of Fethullah Gülen

During a police academy graduation ceremony in Ankara in late September, Erdoğan had said: “They want a pastor [Andrew Brunson] from us, you have a pastor [Fethullah Gülen], too. Extradite him so that we can prosecute him.”

In response to Erdoğan, US State Department spokesperson Heather Nauert said, “I can’t imagine that we would go down that road.”

“In terms of Fethullah Gülen, who is here in the United States, we have received several requests for his extradition from the Turkish government related to him,” Nauert said, adding: “We continue to evaluate it, take a look at the materials that the Turkish government has provided us. I don’t have anything new for you on the subject of that.”

The pro-government Yeni Asır daily claimed in October that it had acquired an audio recording in which Brunson speaks back in 2010 about a coup attempt that would take place in 2016.

The daily said Brunson, who is in pretrial detention in an İzmir prison, talks to a young adult six years ago and implies that there will be a coup in the summer of 2016. Brunson also gives him a survival kit for use during an emergency, including a water purifier, high-calorie pills to be used in the event of a lack of food and mufflers worn by US Special Forces.

According to the report, Brunson says: “There will be a huge earthquake [in Turkey] in the summer months of 2016. Hide those things [the survival kit] in a place you can reach [in difficult times]. And meet me at US Consulate General in İstanbul after that earthquake.”

The pro-Erdoğan Takvim daily on May 20 accused Brunson, whose release US President Donald Trump sought from Turkish President Erdoğan, of being behind a coup attempt in Turkey on July 15, claiming that he would be the CIA chief if the coup attempt had been successful.

According to the top story on Takvim’s front page, Brunson is a “high-level CIA agent” and also a “high-level member of the Gülen movement,” which Erdoğan has labeled as a terrorist organization and which he accuses of masterminding the failed coup attempt. The arrest of the pastor has paralyzed CIA operations in Turkey, according to the article, and the US has been exerting all means to save him.

Takvim’s editor-in-chief, Ergun Diler, who accompanied Erdoğan during his visit to Washington, D.C., in May, also published a column about Brunson with the title “Rambo Pastor,” claiming that the pastor foiled an assassination attempt in 2011 in İzmir due to his agent training.

“Brunson was a ‘deep’ name, and he was influential not only in Turkey but all over the region,” Diler wrote and claimed the CIA would kill him in prison if they believed that Turkey would not deport him to the US.

Takvim is a daily of the Turkuvaz media group, which was run by Serhat Albayrak, brother of Berat Albayrak, energy minister and the son-in-law of President Erdoğan.