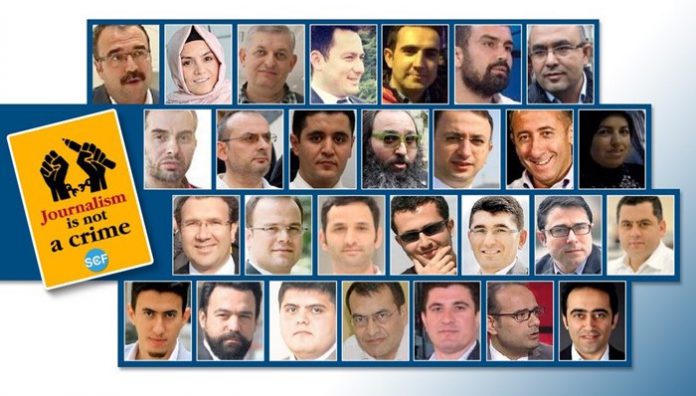 The journalists, some of whom used to work for media outlets affiliated with the Gülen movement, are alleged to be followers of the movement, which is accused by the Turkish government of masterminding a failed coup attempt on July 15, 2016. The movement strongly denies any involvement.

There were 29 defendants in the trial, 19 of whom were in pretrial detention.

The court ruled for the re-arrest of journalist Akkuş, who was released last April.

The court rejected the prosecutor’s request for the re-arrest of Taş and Aksoy and removed the obligation to sign in at a police station regularly yet ruled for the continuation of their travel ban.

The final hearing of the trial resumed on Wednesday and continued on Thursday during which the defendants made their final defense statements and asked for their acquittal. All the journalists said in their defense statements that they only performed their jobs as journalists and did nothing unlawful. They said the media organizations they were working for, which were later designated as being linked to a terrorist organization, were all respectable organizations that operated within the boundaries of the law.

The court acquitted 13 journalists of charges of attempting to overthrow the constitutional order and attempting to destroy the Republic of Turkey.

Speaking to reporters following the announcement of the verdict, journalist Taş said: “This is a judicial decision, we have to respect it. I say all the time that I have had faith in justice, I have always believed in it. I did nothing other than show opposition [to the government]. If being an opponent is a crime in this country, then I am guilty.”

Following the July 15 coup attempt, the Turkish government designated the Gülen movement as a terrorist organization in a development that many say was politically motivated. Working at a Gülen-linked media organization, depositing money in the Gülen-linked Bank Asya or even downloading the mobile phone application ByLock, which is the top communication tool among the Gülen followers according to Turkish authorities, are all seen as signs of being a member of a terror organization.

Zaman, which was Turkey’s best-selling newspaper, was taken over by the government in March 2016 and then closed down in the aftermath of the failed coup attempt. Zaman angered the government with its critical stance and extensive coverage of a corruption scandal that erupted in late 2013.