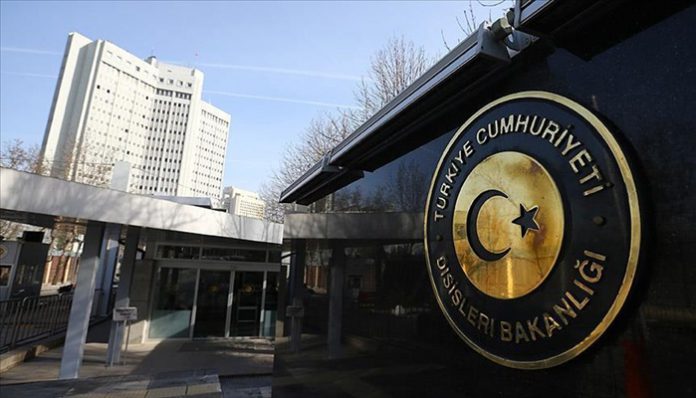 Turkey on Wednesday rejected Western calls to suspend its offensive in northwest Syria, saying the United States misunderstood the extent of a UN cease-fire resolution and accusing France of giving “false information” on the issue, Reuters reported.

Ankara has said the United Nations resolution demanding a 30-day cease-fire across Syria does not apply to its five-week-old military operation in Afrin against Kurdish People’s Protection Units (YPG) militia, which Turkey claims is the Syrian extension of the outlawed Kurdistan Workers’ Party (PKK).

In strongly worded statements to two of its NATO allies, Turkey’s Foreign Ministry spokesman Hami Aksoy said a US State Department appeal that Turkey “go back and read” the cease-fire resolution was unfounded, and he also denied that Paris had told Ankara that the truce also applied to its Afrin campaign.

On Monday French President Emmanuel Macron’s office said he had told Turkey’s President Recep Tayyip Erdoğan that the UN demand “applied to all of Syria, including Afrin, and should be implemented everywhere and by all without any delay.”

Aksoy challenged that account, claiming Macron did not specifically mention Afrin in their telephone conversation about the cease-fire resolution.

“Our reaction regarding the error of giving false information to the public was conveyed to French authorities,” Aksoy said.

The UN Security Council resolution demands all parties “cease hostilities without delay … for a durable humanitarian pause for at least 30 consecutive days throughout Syria.”

It does not apply to military operations against the Islamic State of Iraq and the Levant (ISIL), al Qaeda and groups associated with them or other groups designated as terrorist organizations by the Security Council.

Turkey says the YPG militia, which controls Afrin, is an extension of the PKK, which has been designated a terrorist group by the United States and the European Union.

The YPG is not designated as a terrorist group by the UNSC.

US State Department Spokesperson Heather Nauert told reporters on Tuesday that Turkey should read the cease-fire resolution to “see what the world … is saying about this.”

Pressed several times to agree that Turkey is violating the UN cease-fire resolution, Nauert said, “I would encourage Turkey to go back and read this resolution” unanimously agreed by the UNSC on Saturday.

Aksoy said the resolution did not specifically mention Afrin, and Turkey’s operation there was “a fight that is carried out against the terrorist organizations that target Turkey’s national security and Syria’s unity.”
Nauert’s statement “is unfounded, and it shows that they are not able to understand the focus of the resolution, or they want to distort it,” Aksoy said.

US support for the YPG militia in north Syria has pushed relations between Turkey and the United States to the crisis point. Ankara says that after Afrin it will target the Syrian town of Manbij, where YPG and US forces are deployed together.