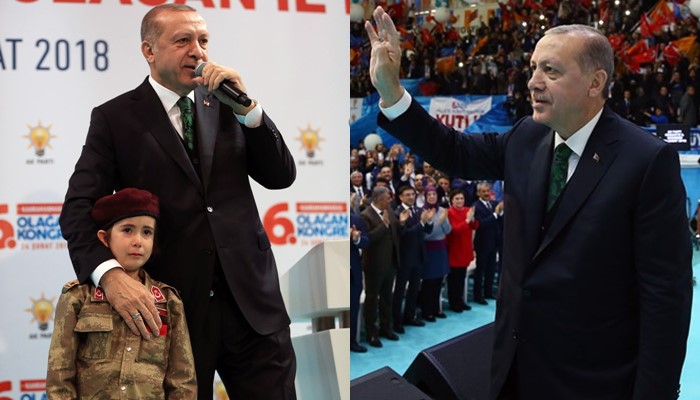 Turkish President Recep Tayyip Erdoğan on Saturday promised to honor a young girl with the Turkish flag if she were to be martyred, during a speech in Kahramanmaraş province.

According to a report by the Ahval news website, among the party members’ cheers of “Chief! Take us to Afrin,” President Erdoğan invited a little girl dressed as a soldier to the podium. “If she is martyred, we will honor her with the flag, God willing,” Erdoğan said.

With 90 percent of Turks supporting a Turkish military operation in the Kurdish-controlled Afrin region of Syria, Erdoğan has been using a gradually more nationalistic tone in his rallies.

Turkey will have three elections in a row in the upcoming year and a half. Pro-government columnist Abdulkadir Selvi argued that support for Erdoğan’s governing party had increased to nearly 50 percent since the Afrin operation was launched.

Several Turkish children in military uniform had saluted President Erdoğan during a speech in the Turkish Parliament last week.

Moreover, Erdoğan talked about the mobilization of reserve units in his speech on Saturday and called on people to check on call-up orders for the military. He has also said he is ready to march with his people when the time comes.

On Jan. 20, the Turkish military launched an operation to fight against the People’s Protection Units/Kurdistan Workers’ Party (YPG/PKK) in the Afrin province of northern Syria. According to the Turkish General Staff, the operation aims to establish security and stability along Turkey’s borders and the region as well as “to protect Syrians from terrorist oppression and cruelty.” The military also said only terror targets were being destroyed and that “utmost care” was being taken to not harm civilians.

A total of 1,951 PYD/PKK and allegedly Islamic State in Iraq and the Levant (ISIL) militants have been “neutralized” since the beginning of Operation Olive Branch, Erdoğan said Saturday. Turkish authorities generally use the term “neutralize” to signify that the targets either surrendered or were killed or captured.

However, the Syrian Observatory for Human Rights (SOHR) in a report on Saturday said that 259, including 40 Turkish soldiers, have been killed during the operation. SOHR said 243 YPG and self-defense forces were killed in Turkish shelling and attacks in the Afrin countryside. The Turkish military announced that 32 Turkish soldiers were killed and 183 were injured.

Speaking to the pro-Kurdish Fırat News Agency (ANF) about civilian casualties on Thursday, Afrin Canton Health Council Co-chair Ancela Resho stated that during the 34 days of the Turkish military operation in Afrin, 176 civilians, including 27 children and 21 women, have been killed, while 484 civilians were wounded, among them 60 children and 71 women.

The Kurdish Red Crescent (Heyva Sor) also announced on Wednesday that the Turkish military’s shelling has killed 17 women and seriously wounded 44 in Afrin.