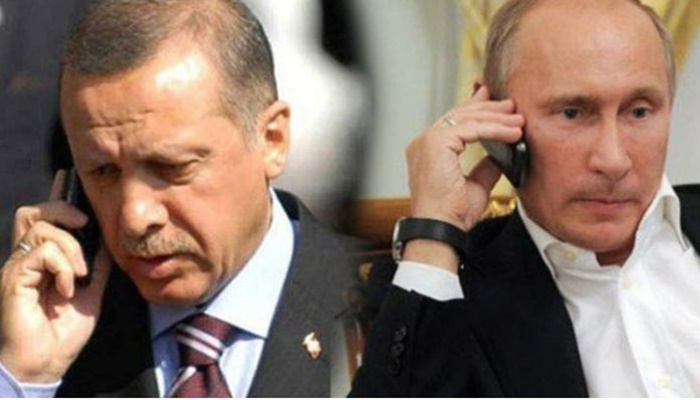 The Turkish and Russian presidents on Monday discussed Turkey’s ongoing operation in northwest Syria and the establishment of new observation posts in Idlib, the Anadolu news agency reported, based on Turkish presidential sources.

Speaking over the phone, Recep Tayyip Erdoğan and his Russian counterpart, Vladimir Putin, agreed to continue cooperation and coordination in the fight against terrorism.

The two leaders discussed the latest developments in Afrin and the process of establishing new observation posts in the de-escalation zone in Idlib.
Turkey on Jan. 20 launched Operation Olive Branch to remove People’s Protection Units (YPG) from Afrin, northwestern Syria, along Turkey’s border.

According to the Turkish General Staff, the operation aims to establish security and stability along Turkey’s borders and the region.

A new observation post is to be established 70 kilometers (43 miles) from the Turkish-Syrian border.

Elements of the Assad regime army and Iran-backed groups are around 10 kilometers (6.2 miles) from the deployment point.

On Oct. 12, 2017, the Turkish military started to cross into the region to establish observation points to monitor the cease-fire regime in the Idlib de-escalation zone.

Under the Astana agreement, Turkey is set to gradually establish 12 observation posts, from Idlib’s north to south.

Idlib, located in northwestern Syria on the Turkish border, has faced intense attacks by the Assad regime after a vicious civil war broke out in 2011.

Since March 2015, Idlib is no longer under the control of the Assad regime and has been overrun by military opposition groups and anti-regime armed organizations.

The two leaders also emphasized the close contact on bilateral and regional issues.

Meanwhile, Iranian Foreign Minister Mohammad Javad Zarif on Monday said Iran understands Turkish concerns over plans of the US in the region, according to Anadolu.

Speaking at the Discussion Club Valday in Moscow, Zarif said: “Concerns of our Turkish neighbors about the US plans in the region can be understood and we need to deal with these concerns. And it is best to do this legally through the Syrian government.”

The operation launched by the Turkish military and Free Syrian Army (FSA) fighters against the Syrian Kurdish Democratic Union Party (PYD), which Turkey sees as the Syrian extension of the outlawed Kurdistan Workers’ Party (PKK), is still ongoing. The YPG, the military wing of the PYD, is supported by the US military in its fight against the Islamic State in Iraq and the Levant (ISIS) and currently controls Manbij, northwestern Syria, where US soldiers are also deployed.

He also called the US attempt to use the Kurdish factor in Syria as “short-sighted.”

About Iranian military bases in Syria, he said: “No, we don’t have any.”