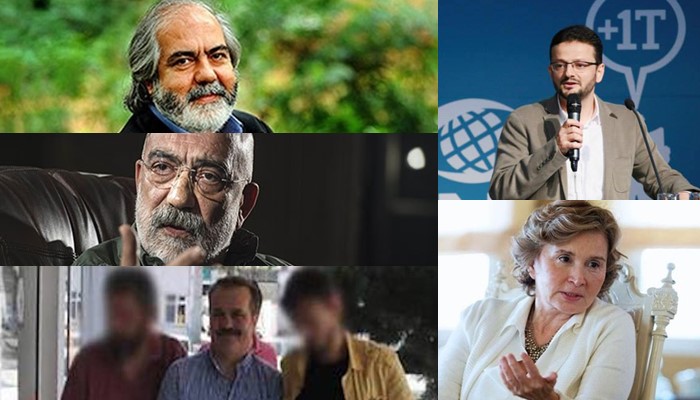 A verdict of aggravated life imprisonment, or life without parole, handed down to three Turkish journalists on Friday on charges of attempting to destroy the constitutional order even after Turkey’s highest court had ruled for the release of one of them has sparked international condemnation.

“The case against the Altan brothers, Ilıcak, and the others has been politically motivated from the very start,” said Hugh Williamson, Europe and Central Asia director at Human Rights Watch. “The verdict sets a frightening precedent for the dozens of cases of other journalists, writers, and government critics currently on trial in Turkey.”

Mehmet Altan, an economics professor and journalist, and his journalist brother Ahmet Altan were charged with sending subliminal messages on a television talk show a day before an abortive military coup in July 2016. Nazlı Ilıcak, another veteran journalist and two former employees of the now-closed Zaman newspaper as well as a former Police Academy lecturer were also given aggravated life sentences, while an advertising company manager was acquitted.

The Constitutional Court had ruled on Jan. 11 that Mehmet Altan and another jailed journalist, Şahin Alpay, be released, saying their rights had been violated. But İstanbul’s 26th and 13th High Criminal Courts refused to comply with the order to release the journalists.

“These verdicts, the first against journalists accused of being connected to the July 2016 failed coup, set a devastating precedent for the many other journalists and writers in Turkey who are being tried on similarly spurious charges,” said Jennifer Clement, president of PEN International.

ARTICLE 19, PEN International and Reporters Without Borders (RSF), who observed the trial since the first hearing in July 2017, found the proceedings to be marred from the outset by profound violations of the defendants’ rights to a fair trial. Initially they faced three consecutive life terms on charges of plotting to overthrow the government, parliament and the constitutional order for their alleged links to a network led by Fethullah Gülen, who the government accuses of orchestrating the attempted coup.

“Turkey’s justice system is in crisis, and domestic remedies to human rights abuses are not working,” said Thomas Hughes, executive director at ARTICLE 19. “The Altans and Nazli Ilicak’s cases were given priority status at the European Court of Human Rights in April 2017. It is urgent that it now takes a decision on these cases.”

“We call on European member states to increase political pressure on Turkey to release the Altans, Nazli Ilicak and other journalists detained on groundless charges,” said ARTICLE 19 on its website.

“We know that political pressure works – earlier today the Turkish-German journalist, Deniz Yucel, was released after a year in detention following talks between German Chancellor Merkel and Turkish PM Yildirim,” said RSF Deputy Secretary General Antoine Bernard. “Much more of this pressure is needed. Other countries, and political and financial institutions including the EU and need to step up and demonstrate the values they profess to hold in their relations with Turkey.”

Deniz Yücel, a German Turkish journalist, was released on Friday by an İstanbul court following a year spent in Silivri Prison, after he was formally charged with disseminating the propaganda of a terrorist organization.

Rebecca Harms, spokeswoman for foreign affairs and expert on Turkey in the Greens/EFA group in the European Parliament, on Friday criticized the verdict sentencing the journalists to aggravated life imprisonment .

“The positive news of Deniz Yücel’s release, which makes me very happy for him and his wife, is overshadowed by the cruel verdict of life-long solitary confinement for six of his Turkish journalist colleagues, including Ahmet Altan, Mehmet Altan, and Nazli Ilicak,” said Harms in a written statement.

“These rulings are a terrible blow to all concerned journalists and all those who face similar unfounded charges and have been detained in Turkey for months and years now,” she added.

“I repeat my urgent call to the European Court of Human Rights to finally rule on these cases without any further embarrassing delay,” said Harms. “The EU and its member states must try much harder to have an impact on Turkey. The EU needs to be ready to use its economic weight to push Turkey to return to the rule of law and respect for human rights.”

Meanwhile, an unnamed US State Department official called the sentencing announcement Friday deeply troubling, according to the Courthouse News Service.

“These extraordinary sentences appear to be another example of the Turkish authorities criminalizing journalism under the state of emergency in order to discourage the free expression of viewpoints critical of the government,” the official said. “We firmly believe that a free press and the freedom of speech – even speech which some find controversial or uncomfortable – strengthen democracy and should be protected. We urge Turkey to end its protracted state of emergency, to release all those imprisoned arbitrarily, including these six journalists, to abide by its commitments to freedom of the press, due process and judicial independence, and to respect the fundamental freedoms of its people.”

International civil society organizations have condemned the Turkish government for abusing an ongoing state of emergency in the country to suppress freedom of expression and have called on the government to immediately and unconditionally release all journalists detained without evidence and to cease its harassment of the few remaining independent and opposition media outlets.

Human rights advocacy group Amnesty International in October called on Turkish authorities to put an end to the ongoing media crackdown in the country and to free the journalists held in Turkey’s prisons.

“Turkey now jails more journalists than any other country. One third of all imprisoned journalists in the world are being held in Turkish prisons, the vast majority waiting to be brought to trial. Journalists and media workers from all strands of opposition media have been targeted in an unprecedented crackdown since the violent coup attempt in July 2016. Coupled with the closure of more than 160 media outlets, the message is clear and disturbing: the space for dissent is ever-shrinking and speaking out comes at an immeasurable cost,” Amnesty said in its statement.