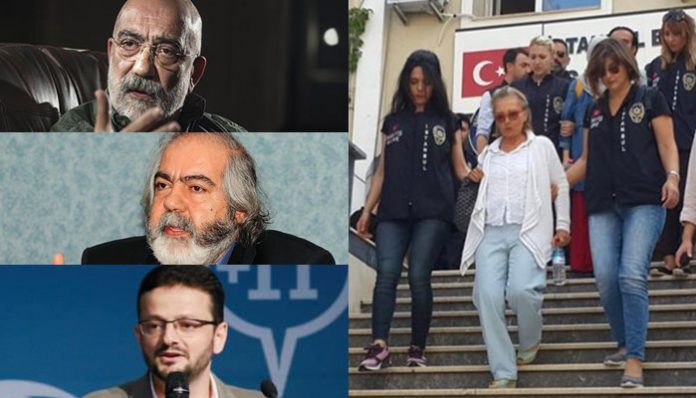 A Turkish court on Friday handed down aggravated life sentences to three prominent journalists and three other defendants on charges of attempting to destroy the constitutional order even after Turkey’s highest court had ruled for the release of one of them.

Mehmet Altan, an economics professor and journalist, and his journalist brother Ahmet, were charged with giving coded messages on a television talk show a day before the abortive July 15 military coup in 2016. Nazlı Ilıcak, another veteran journalist, two former employees of the now-closed Zaman newspaper, Zaman brand marketing manager Yakup Şimşek and art director Fevzi Yazıcı, as well as former Police Academy lecturer Şükrü Tuğrul Özşengül were also given aggravated life sentences, while advertising company manager Tibet Murat Sanlıman, another defendant who was not in pretrial detention, was acquitted.

The trial of the journalists had resumed on Monday. During the final hearing at the İstanbul 26th High Criminal Court on Friday, the judge gave 10 minutes to each of the defendants to make their final remarks.

All of the suspects requested their acquittal and denied the accusations leveled against them them. Ilıcak and Mehmet Altan asked the court to comply with a Constitutional Court ruling last month ordering the release of Altan and another jailed journalist, Şahin Alpay. Ilıcak said her case was similar to that of Mehmet Altan and that she should also be released.

Ahmet Altan, who has delivered historic defense statements before the court, said in his final remarks that he has been tried hundreds of times in his lifetime at different periods in the country, but that he has for the first time stood trial in a court that has committed a constitutional crime.

“Such a trial has never before been seen, not during the time of the Ottoman Empire and not during the history of the [Turkish] Republic. No country can allow two politicians and judges to destroy a state of law. It will not do so. It will be beneficial for everyone if you abandon an unlawful, unconstitutional and illegal journey,” said Ahmet Altan.