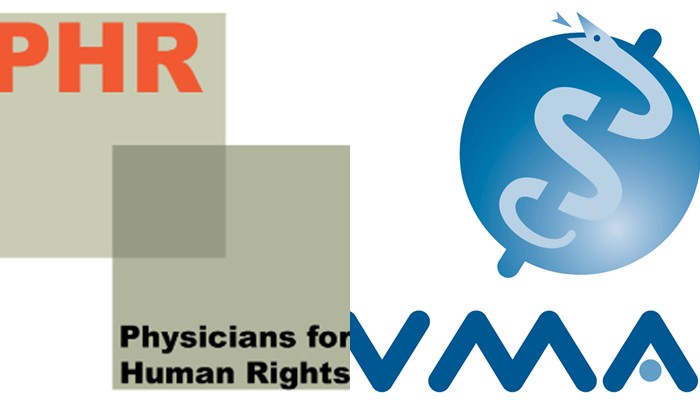 Physicians from prominent international medical associations have in a letter called for the immediate release of 11 members of the Turkish Medical Association’s (TTB, or TMA) central council who were detained earlier this week for a statement criticizing Turkey’s military operation in Syria’s Afrin region.

The physicians urged the Turkish authorities to immediately release the leaders of the TTB, put an immediate end to all acts of harassment and intimidation, including at the judicial level, against the TTB; and ensure in all circumstances respect for human rights and fundamental freedoms in accordance with international human rights standards and instruments ratified by Turkey.

The Ankara Chief Public Prosecutor’s Office on Monday launched an investigation into the 11 central council members of the TTB after President Erdoğan lambasted them for their statement criticizing the Afrin operation, while the Interior Ministry filed criminal complaints against them.

“We are absolutely appalled by such a reaction to TMA’s call for peace. We denounce this escalation of aggression aimed at the TMA in the strongest terms,” the physicians said in the letter, adding that like their Turkish colleagues, the medical professionals they represent, have the duty to denounce violence and alert their governments and other relevant decision-makers to the dramatic immediate and long-term health effects of warfare and armed conflicts.

In a statement titled “War is a Matter of Public Health” issued on Jan. 24, the TTB called on the government to end the war: “No to war, peace immediately!”

Accusing the association of “treason,” Erdoğan said on Jan. 29 in Amasya: “They are the servants of imperialism.”

The physicians’ letter says the TTB has done nothing other than express its opinion in support of human rights and peace.

“This is not a criminal offence. Moreover, filing a criminal complaint against the TMA on the basis of the peaceful exercise of freedom of expression constitutes a flagrant infringement of human rights as stated in the International Covenant on Civil and Political Rights that Turkey ratified in 2003, hereby establishing its consent to be bound by its provisions.”

In the meantime, the İstanbul University administration has suspended Professor Raşit Tükel, head of the TTB and currently under detention, as well as TTB central council member Professor Taner Gören, who is also in custody, for their posts for a period of three months, according to a tweet from Republican People’s Party (CHP) deputy Barış Yarkadaş on Thursday.

Turkey on Jan. 20 launched a military operation in Afrin, which is controlled by the Kurdish Syrian Democratic Union Party (PYD), which Turkey sees as the Syrian extension of the outlawed Kurdistan Workers’ Party (PKK).

The Turkish government has reacted strongly to people who oppose the operation, and prosecutor’s offices have launched investigations into those who share social media messages critical of the operation.