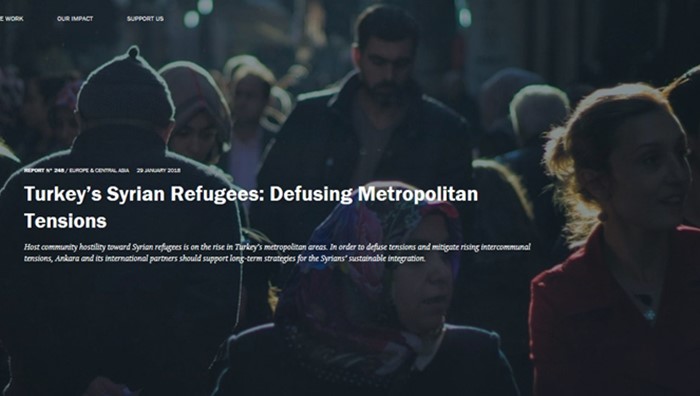 The International Crisis Group (ICG) said in a report released on Tuesday that violence in Turkish cities between host communities and Syrian refugees increased significantly in the last half of 2017, urging Turkey to take steps to ensure the sustainable integration of its refugee population while addressing host community grievances.

“Intercommunal violence between host communities and Syrian refugees increased threefold in the second half of 2017 compared to the same period in 2016. Growing grievances in Turkey’s largest metropolises Istanbul, Ankara and Izmir are driving inter-ethnic rivalries, socio-economic inequality and urban violence,” the ICG said in the report.

Turkey has taken in over 3.4 million Syrian refugees in the past six years since the start of the civil war in the neighboring country, but host community hostility toward these newcomers is rising, with 35 people dying in incidents of inter-communal violence, including 24 Syrians.

The inter-ethnic rivalries, socio-economic inequality and urban violence are being driven by growing grievances in Turkey’s largest cities, “where host communities see Syrians as culturally different and resent their competition for low-wage jobs or customers, especially within the informal economy,” according to the ICG. Many also believe Syrians receive preferential access to public services and assistance.

“The national government tends not to engage local authorities or civil society in planning for initiatives designed to promote social cohesion, often excluding those best placed to understand local needs and tensions. Treasury allocations are distributed among municipalities according to the number of Turkish citizens, without considering the refugee population, which means resources are especially stretched in communities with large numbers of Syrians. By ignoring or downplaying tensions, the government has allowed hostilities to reach a boiling point in some refugee-dense communities,” the report said.

Providing education for refugee children remains a problem, with some 370,000 of nearly 1 million school-age children not enrolled and another 230,000 still attending the temporary education centers being phased out as Syrian children transition into the public-school system.

The greatest challenge Turkey faces in dealing with its refugee population is integrating the Syrians into the formal labor market. The refugees tend to have little education and few skills, and most speak no Turkish. “An estimated 750,000-950,000 Syrians currently work in the informal sector; only 15,000 have obtained the permits needed for formal employment,” according to the ICG.

“Ankara and its international partners should take steps to ensure the sustainable integration of Syrians while pre-emptively addressing and managing host community grievances. They should also develop mechanisms to defuse refugee-related tensions, particularly in the country’s rapidly growing cities” the ICG said in its report.

“ … the government needs to acknowledge that most Syrian refugees are likely to remain and take steps to integrate them without neglecting the needs and grievances of Turkish citizens, especially in the country’s rapidly growing cities.”

The full ICG report can be accessed at https://www.crisisgroup.org/europe-central-asia/western-europemediterranean/turkey/248-turkeys-syrian-refugees-defusing-metropolitan-tensions