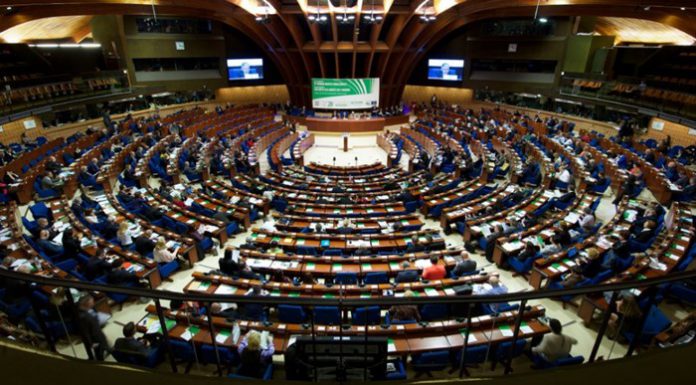 The regime of Turkish President Recep Tayyip Erdoğan, which has locked up almost 600 lawyers, was apparently irritated when the Parliamentary Assembly of the Council of Europe (PACE) adopted a recommendation on Jan. 24, 2018 to establish a platform for threats to the safety and independence of lawyers.

The recommendation, proposed by PACE rapporteur Sabien Lahaye-Battheu of Belgium on behalf of the Committee on Legal Affairs and Human Rights, called on the Committee of Ministers, the executive body of the Council of Europe (CoE), to establish “an early-warning mechanism to respond to immediate threats to lawyers’ safety and independence and to their ability to perform their professional duties effectively, modeled on the Platform to promote the protection of journalism and safety of journalists.”

This is a great idea and one that may produce concrete results given the fact that the platform would be backed by an intergovernmental organization, and a member country like Turkey would feel compelled to address or at least respond to the concerns raised in the platform. The successful precedent of the CoE Media Platform, which not only helped raise awareness of threats to journalists in 47 member states but also forced the Turkish government, the most notorious jailer of journalists worldwide, with 245 reporters and media workers behind bars according to the Stockholm Center for Freedom, to respond to the concerns.

During the debate at PACE, where the assembly approved the recommendation to establish a convention to protect the freedom to engage in the legal profession, Şaban Dişli, a lawmaker from Erdoğan’s ruling Justice and Development Party (AKP), opposed the idea of setting up a platform for lawyers. He said the following: “The rapporteur suggests a structure similar to the platform for journalists. However, that platform is criticized even by the secretary-general of the Council of Europe in respect of the role of NGOs, which participate in the process. The platform’s effectiveness is also questioned.”

The claim that Secretary-General Thorbjørn Jagland criticized the platform for journalists is a blatant lie. How do I know? I checked with his office when a similar lie was first uttered by another of Erdoğan’s stooges, Talip Küçükcan, then head of the Turkish delegation to PACE during the winter session in 2017. He even submitted an amendment to the PACE resolution on media, asking for a revision to be made to the platform. He suggested the creation of new mechanism “to filter and monitor the alerts, with a view to preventing misuses and abuses as well as enhancing the credibility of the platform.” In other words, Turkey wanted to bog down the alerts in bureaucratic hurdles and find a way to veto some alerts with new mechanisms.

To defend the amendment, Emine Nur Günay, another Turkish lawmaker from Erdoğan’s AKP, took to the floor and said, “We would like to add a separate paragraph, the reason being that the functioning of the platform should be revised.”

The PACE Committee on Culture, Science, Education and Media also opposed the Turkish move to change the platform. In the end, the amendment was killed by a vote of 110 to 18, with 10 deputies abstaining.

Now ashamed for locking up a record number of lawyers in Turkey in approximately one year, Erdoğan’s henchmen also tried to thwart this new initiative to set up a platform for lawyers. According to the Arrested Lawyers’ Initiative, the Erdoğan regime has prosecuted 1,506 lawyers, formally arrested 572 of them and shut down 34 lawyers associations thus far on dubious charges as part of a campaign of intimidation and terrorization. Ankara does not want that information shared on one of the most respected institution’s platforms, which champions the rule of law, fundamental rights and freedoms and democracy. The CoE’s monitoring bodies as well as the European Court of Human Rights (ECtHR) would have to pay closer attention to the alerts that would be publicized on the new platform.

On the same day PACE was debating the recommendation on lawyers’ safety, the International Bar Association Human Rights Institute (IBAHRI), an international lawyers group, released a statement to mark the “2018 Day of the Endangered Lawyer.” The IBAHRI called for the cancellation of all proceedings against those who have been arbitrarily detained and/or prosecuted and for the immediate release of those convicted.

“IBAHRI is concerned with the reported allegations of torture and mistreatment against detained lawyers, and urges the Turkish authorities to prevent any further forms of mistreatment and to immediately and effectively investigate all allegations of torture and ill-treatment,” said its Co-chair Michael Kirby, who is an Australian jurist, academic and former justice of the High Court of Australia.

“This situation demonstrates a flagrant disregard for the rule of law and is a deliberate attack on human rights defenders and legal professionals,” said IBAHRI Co-chair Hans Corell, a retired ambassador and former judge of appeal, former undersecretary-general for legal affairs and legal counsel of the United Nations.

“We call on the Turkish government to bring an end to this deplorable situation and to adhere to international instruments, including the Universal Declaration of Human Rights, the International Covenant on Civil and Political Rights, and the European Convention on Human Rights, by which Turkey is bound,” added Corell.

The unprecedented crackdown on lawyers also drew the attention of the Council of Bars and Law Societies of Europe (CCBE), representing more than 1 million European lawyers, which wrote a letter to Erdoğan on Nov. 16, 2017 to urge the release of Turkish lawyers in prison. Signed by CCBE President Ruthven Gemmell, the letter raised concerns on the torture and ill treatment of lawyers in detention and expressed concern regarding the recent convictions of dozens of lawyers who were indicted on dubious charges. The CCBE held a side event in January 2018 while PACE was debating the recommendation on the international convention.

She said: “If lawyers cannot exercise their professional activities independently and free from pressure from authorities or anyone else, the judicial protection of human rights and the proper functioning of the judiciary in general are placed in jeopardy. There is therefore a very real threat to the rule of law.”

Turkey is not only blackmailing the Council of Europe by arbitrarily cutting off some €20 million because of criticism on rights violations but is also attempting to undermine its work by trying to kill important initiatives such as the platform for lawyers. So far, their repeated efforts have failed, but Erdoğan won’t stop in this endeavor. Perhaps it is time to send a stronger and unequivocal message to him.