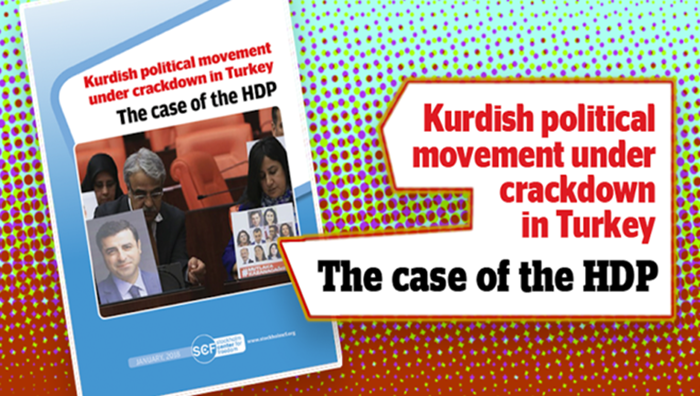 The Kurdish political movement has come under intense pressure from the current government of President Recep Tayyip Erdoğan, who is bent on marginalizing the pro-Kurdish Peoples’ Democratic Party (HDP) with the help of a military crackdown and abuse of the criminal justice system, according to a new report titled “Kurdish political movement under crackdown in Turkey: The case of the HDP,” issued on Sunday by the the Stockholm Center for Freedom (SCF).

Erdoğan, who has done away with on-and-off initiatives to address Turkey’s longstanding Kurdish problem, has made deals with nationalists, neo-nationalists and Islamists to persecute leaders, elected local officials and members of the HDP, including Co-chairs Selahattin Demirtaş and Figen Yüksekdağ, who recently had to resign. The legitimate Kurdish political movement has been sandwiched between a repressive regime on the one hand and the commanders of the armed Kurdistan Workers’ Party (PKK), which has grown uneasy with the electoral successes of the HDP in the 2015 general elections, on the other.

Not only were decades-long grievances of the Kurds in Turkey not addressed but also Kurds who wanted to present their demands on political platforms and compete in local and national elections were deprived of tools and venues to make their cases. More often than not, the criticism from HDP politicians was described by Erdoğan and other government officials as treachery, betrayal of the Turkish nation and serving the interests of terrorist groups.

It has now become clear that the main reason for the government hammering the HDP was the frustration on the part of President Erdoğan in his failure to woo Kurdish voters and thus lose the majority in the Turkish Parliament for the first time in their 13 years of rule in the June 2015 elections. Many Kurdish lawmakers were prosecuted, with some jailed; local elected officials were sacked and/or imprisoned; and thousands of HDP members and supporters were arrested and put in prison.

“Erdoğan wants to shore up his one-man rule without any check on his absolute power, whether that challenge comes from the critical media, opposition parties or civil society groups,” said Abdullah Bozkurt, president of SCF, an advocacy group that monitors rights violations in Turkey. “The Kurdish opposition political movement represents a major threat to his rule.”

Not surprisingly, Turkey’s military incursion into Afrin comes at a time when voter support for Erdoğan and his ruling Justice and Development Party (AKP) ahead of the 2019 general elections is plummeting. The AKP government sees this operation as an opportunity to fan nationalist euphoria and religious zealotry while creating a pretext to justify further clamping down on the opposition, especially the Kurdish opposition. Already, hundreds of critics including HDP politicians and members who opposed the cross-border war have been branded as terrorists, with some arrested on dubious charges.

In its new report SCF gives a snapshot of what has happened since February 2015, when HDP representatives and AKP ministers came together for the last time to publicly discuss how to move forward in resolving the Kurdish problem, coming up with a deal known as the Dolmabahçe Agreement. Erdoğan torpedoed the agreement to win nationalists and launched a campaign of stigmatizing, demonizing and marginalizing the most substantial Kurdish political movement in Turkey.

SCF has expressed concern that the Turkish military intervention in Syria will further agitate and upset the Kurds of Turkey, who were already suffocating from the relentless defamation by the Erdoğan government. As more violence and destruction take place in Syria, where the Kurds find themselves battling the Turkish military and its proxy the Free Syrian Army (FSA), the more tension will be witnessed on Turkey’s domestic front. This may lead to a new set of problems in Turkey on top of the lingering issues that still remain unresolved. By cracking down on fundamental rights and freedoms such as the right to free assembly, the right to freedom of association and the right to freedom of speech and expression, the Erdoğan government has been undermining the integrity and cohesiveness of the diverse Turkish society.

The Turkish government’s obligations under international conventions have already begun to be questioned with this crackdown on Kurds, which is continuing unabated. In March 2017 the Office of the United Nations High Commissioner for Human Rights released a damning report on the serious human rights and international law violations by Turkish security forces in Turkey’s Southeast. A month later, the Parliamentary Assembly of the Council of Europe placed Turkey under a formal monitoring process when it found that Turkey had not fulfilled its obligations to the Council of Europe. Calls are now being made for the UN Security Council to intervene in Turkey’s incursion into Syria’s Afrin region.

SCF has called on the Turkish government to stop the crackdown on Kurds and resume talks with the legitimate representatives of the Kurdish political movement to address grievances and grant rights and freedoms that should not be subject to any negotiations in the first place. The violence must stop, the persecution of all critical, opposition and dissident groups must be halted and the overall democratic deficit of Turkey must be addressed so that the security and stability of the country with all the diversity and vibrancy of civil society can be restored, according to SCF.