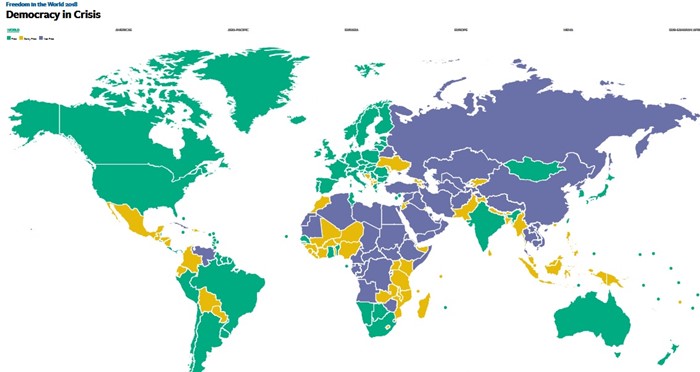 Turkey’s freedom status has declined from Partly Free to Not Free in “Freedom in the World 2018: Democracy in Crisis,” the annual report released on Tuesday by Freedom House, a US-based independent watchdog organization dedicated to the expansion of freedom and democracy around the world.

“Turkey’s status declined from Partly Free to Not Free due to a deeply flawed constitutional referendum that centralized power in the presidency, the mass replacement of elected mayors with government appointees, arbitrary prosecutions of rights activists and other perceived enemies of the state, and continued purges of state employees, all of which have left citizens hesitant to express their views on sensitive topics,” Freedom House said in its summary of status changes worldwide.

“Turkey’s passage over the threshold from Partly Free to Not Free is the culmination of a long and accelerating slide in Freedom in the World. The country’s score has been in free fall since 2014 due to an escalating series of assaults on the press, social media users, protesters, political parties, the judiciary, and the electoral system, as President Recep Tayyip Erdoğan fights to impose personalized control over the state and society in a deteriorating domestic and regional security environment.

“Erdoğan has pushed out his rivals and former allies within the ruling party, reshaped media ownership to fit his needs, and rammed through an unpopular constitutional referendum to create a ‘super-presidential’ system without meaningful checks and balances. His response to the July 2016 coup attempt has become a sprawling witch hunt, resulting in the arrest of some 60,000 people, the closure of over 160 media outlets, and the imprisonment of over 150 journalists. The leaders of the third-largest party in the parliament are in prison, and nearly 100 mayors across the country have been replaced through emergency measures or political pressure from the president. The government has even pressed its crackdown beyond Turkey’s borders, triggering a flood of Interpol ‘red notice’ requests to detain critics abroad, among other effects,” according to the report.

Turkey’s aggregate score was 32/100, with 0 the least free and 100 the most free, and its overall status changed from Partly Free to Not Free. On a scale of 1 to 7, with 7 being the least free, Turkey’s freedom rating declined from 4.5 in the 2017 report to 5.5, its political rights rating dropped from 4 to 5 and its civil liberties rating fell from 5 to 6 “due to a deeply flawed constitutional referendum that centralized power in the presidency, the mass replacement of elected mayors with government appointees, arbitrary prosecutions of rights activists and other perceived enemies of the state, and continued purges of state employees, all of which have left citizens hesitant to express their views on sensitive topics.”

In its summation on Turkey, Freedom House states:

“President Recep Tayyip Erdoğan’s Justice and Development Party (AKP) has been the ruling party in Turkey since 2002. After initially passing some liberalizing reforms, the government has shown growing contempt for political rights and civil liberties in recent years, perpetrating serious abuses in areas including minority rights, free expression, associational rights, corruption, and the rule of law.

“The Turkish government’s sprawling crackdown on its real and suspected opponents, touched off by a coup attempt in July 2016, continued throughout 2017.

“Using emergency powers and vaguely worded terrorism laws, the authorities had suspended or dismissed more than 110,000 people from public-sector positions and arrested more than 60,000 others by year’s end. Extensive use of pretrial detention meant that many suspects were held behind bars for long periods without due process. There was increasing evidence of extrajudicial ‘disappearances’ and routine torture of political detainees. In June and July, officials arrested a number of leading human rights activists on terrorism charges. Osman Kavala, perhaps Turkey’s most prominent civil society leader, was detained in October and eventually charged with attempting to overthrow the constitutional order. Since the attempted coup, at least 1,500 civil society organizations have been summarily closed and their property confiscated. The prosecution of journalists and closure of media outlets continues. Arrests based on messages shared via social media are common, leading to widespread self-censorship and a general chilling effect on political discourse.

“In April 2017, a government-backed package of constitutional amendments was formally approved through a referendum. When fully implemented in 2019, the changes will radically increase the power of the presidency and reduce democratic checks and balances. The referendum was conducted on a manifestly unequal playing field, particularly in light of the ongoing state of emergency and related restrictions on the media, the opposition, and civil society. Moreover, the Supreme Election Council intervened in ways that seemed to favor the government and cast serious doubt on the integrity of the tabulation process.”