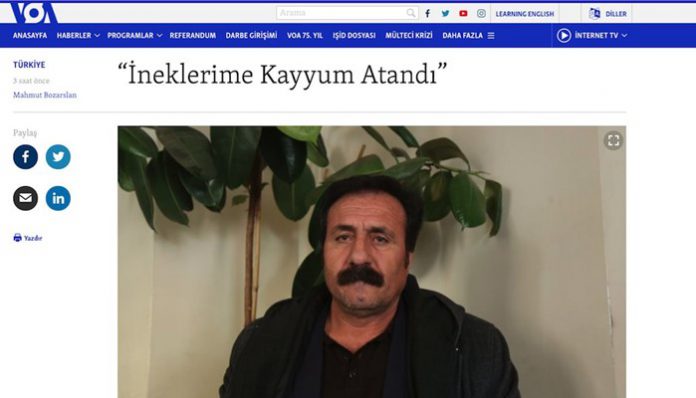 Ali Vuran, a former civil servant who was dismissed from the Diyarbakir Municipality in a crackdown launched by the Turkish government following a failed coup in 2016, has said his cows were seized by the government.

Voice of America’s Turkish edition reported Sunday that Vuran took up farming and animal husbandry after he was fired from the Diyarbakir Municipality by means of a post-coup emergency decree.

Vuran has failed to avoid further persecution as the government cancelled his agricultural loan worth around TL 8,500 ($2,500) and seized the five cows he purchased after his dismissal.

“When they seized my agricultural support loan, I decided to sell off the cows, registered with the ministry by their ear tags. It turns out that a seizure was carried out on the ear tags of my five cows. I’m unable to sell them now,” Vuran said.

“I committed no offense and don’t have a criminal record. They are victimizing us. I can’t sell the cows and I can’t do anything else. They suspended my commercial livelihood,” he added.

Starting from the aftermath of the failed coup in the summer of 2016, the government has been conducting a sweeping crackdown against dissidents including followers of the Gülen movement, liberals, the Kurdish minority and others from opposition circles.

Dozens of Kurdish municipalities including the Diyarbakir Metropolitan Municipality have been taken over by governors.

The government blames the movement for the failed coup; the group denies any involvement.

Meanwhile, nearly 1,020 companies with a total value of $12 billion in assets have been seized and transferred to the state-run Savings Deposit Insurance Fund (TMSF) over alleged Gülen ties. (Turkey Purge)