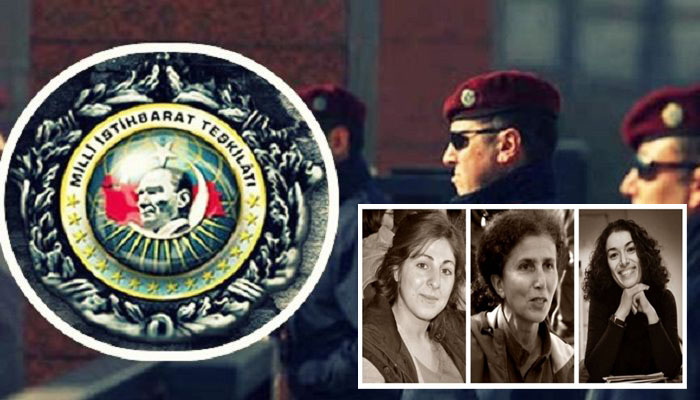 On Jan. 9, 2013 founding member of the PKK Sakine Cansız, Kurdistan Information Bureau (KNK) Paris representative Fidan Doğan and Leyla Söylemez, who was a member of the Kurdish youth movement, were assassinated in their Paris bureau. Suspect Ömer Güney died in prison on Dec. 17, 2016, just a few weeks before his trial.

The trial was planned to start on Jan. 23, 2017 in the Paris High Criminal Court. However, the case was closed after Güney’s demise in December 2016. The investigation into the murder of the three Kurdish women was later reopened upon an appeal filed by lawyers.

According to a Wednesday report by the pro-Kurdish Fırat news agency (ANF), MİT operative Sabahattin Asal, who joined peace talks with jailed PKK leader Abdullah Öcalan on Marmara’s İmralı Island along with MİT’s Muhammed Dervişoğlu on behalf of the state, was the planner of the Paris killings of Jan. 9, 2013.

The ANF report said Asal was one of the two top MİT officials who were captured by the PKK in August 2017. He had been working directly with MİT Undersecretary Hakan Fidan, who is under direct orders from Turkish President Recep Tayyip Erdoğan.

According to the KCK statement reported by ANF, the captured MİT members are Erhan Pekçetin and Aydın Günel, who allegedly conducted missions across Turkey and in Kurdish-dominated regions of neighboring countries for 20 years and were later assigned to MİT headquarters.

The reports said Pekçetin is the head of MİT’s department of domestic ethnic separatist activities, while Günel is the human resources administrator of MİT both inside and outside the country. The KCK said these two have direct or indirect information about all the operations of MİT as they have major responsibilities and close relations with other departments.

The KCK also reminded that two other MİT officials had previously been captured in Cizre and claimed that the documents and information provided by them and the recently captured two MİT officials reveal MİT’s conspiracies against the Kurdish people, socialists, opposition circles, intellectuals, writers, Alevis and all different ethnic and religious communities in Turkey and abroad.

The KCK has also claimed that the President Recep Tayyip Erdoğan-led Justice and Development Party (AKP) government had initiated an annihilation policy while the İmralı talks were going on and added that “the fact that Sabahattin Asal, who joined the İmralı talks along with Muhammed Dervişoğlu on behalf of the state, is the planner of the Paris killings of 9 January 2013 proves the conspiratorial character of the AKP government and MİT.”

The KCK said the documents seized from the two MİT operatives reveal that the AKP government led by Erdoğan played the greatest role in the destruction in Syria.

The KCK claimed the two MİT officials who were kept for five months and the two others previously captured have been treated according to universal law and the laws of the KCK. “Despite the ongoing conflict, the captured MİT members’ rights to life have been respected and their identity, personality and honor have not been violated since the moment they were arrested,” said the KCK.

The KCK has also asserted that “as part of the operation launched in August 2017, MİT’s organizational structure, organization, members, headquarters, residences, domestic and foreign networks and elements infiltrated into states and organisations were exposed. Several MİT actions like the Paris killings and assassinations in Rojava, and their illegal secret interrogation centers were found out in detail.”

According to KCK claims, the identities of the MİT members, affiliated spies and local moles in Bakurê (northern) Kurdistan, Turkey, Europe, Rojava and Bashurê (southern) Kurdistan have been uncovered, and some these agents and affiliated members have been captured. The KCK claimed the organizational network of MİT has sustained severe blows in several areas.

“With the new information-documents revealed with every arrest, the work of MİT was practically paralyzed both inside and outside Turkey,” the KCK said, adding that “the crimes MİT has committed against our people and other peoples will soon be shared with the public.” (Stockholm Center for Freedom [SCF])