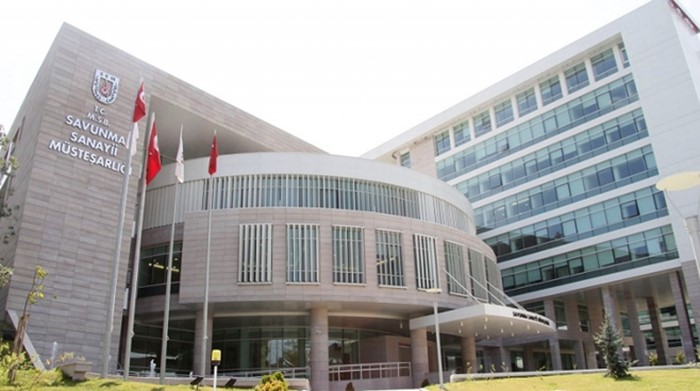 Turkey’s Islamist President Recep Tayyip Erdoğan has been building his own military industrial complex to sustain his autocratic regime by consolidating arms manufacturers and government procurement agencies under his direct and indirect control.

The goal is not only to monopolize the arms and weapons industry in Turkey under his rule but also to create a sustainable supply chain to keep sending arms and ammunition to proxies that do his dirty bidding as Erdoğan’s long arm abroad. The two-prong strategy that has been pursued by Erdoğan for some time now is predicated upon taking over control of all government agencies that are involved in the production, development and procurement of arms and defense materiel while redistributing and transferring assets of private arms manufacturers to a few companies that are close to him.

The first part of his plan was fully realized with a new decree-law issued on Dec. 24. 2017 that placed the multi-billion dollar industrial military complex run by various government agencies under his direct control. Article 64 of decree No. 696 stated that the board of trustees for the Foundation for Strengthening the Turkish Armed Forces (Türk Silahlı Kuvvetleri Güçlendirme Vakfı in Turkish, or TSKGV) would now be chaired by the Turkish president. The TSKGV has shares in many leading defense entities such as military electronics producer Aselsan, military avionics manufacturer Havelsan, rocket producer Roketsan, Turkish Aerospace Industries (TAI), battery manufacturer Aspilsan and others.

The Undersecretariat for the Defense Industry (SSM), which is responsible for most Turkish weapons purchases and currently runs more than 460 programs valued at $35 billion, is also brought under the command of Erdoğan with a change in the same decree-law’s Article 55. As a result, Erdoğan will chair the SSM Executive Committee, the decision-maker in procurement, as opposed to the prime minister as in previous practice. Therefore, Erdoğan can leverage arms purchases to play as a trump card when needed, as in the case of four S-400 missile batteries purchased from Russia to get back at NATO and the US or to offer carrots to some European partners, as in the case of the Franco-Italian Eurosam consortium, which is in talks with Turkey to co-produce an air defense network.

While having control over the key decisions on big buck defense items will give Erdoğan more muscle in arm-twisting his way out of mounting criticism on rights violations in Turkey, the consolidation of private arms dealers, producers and contractors under his control will help him fuel armed conflict and proxy battles both in Turkey and abroad. He actually incorporated one firm into his family when his daughter Sümeyye married Selçuk Bayraktar, the chief technology officer of Baykar Makina, which manufactures armed and unarmed drones for the Turkish military and law enforcement agencies. In many speeches Erdoğan often boasted about Bayraktar-manufactured armed drones, saying they have enhanced Turkey’s counterterrorism capabilities. More lucrative contracts are on the way for the company as long as Turkey’s battle with the outlawed Kurdistan Workers’ Party (PKK) continues.

Another company that produces armored vehicles for the Turkish security services was transferred to a businessman close to Erdoğan. In 2014 the Savings Deposit Insurance Fund (TMSF) handed over vehicle maker BMC to Es Mali Yatırım & Danışmanlık, a company that is owned by Ethem Sancak. BMC was originally owned by Cukurova Holding but was seized by the government in 2013 and sold to Sancak at a highly discounted price, while the company’s debts were footed by taxpayers. Sancak, who openly declared his love for Erdoğan, is now serving as a member of the ruling Justice and Development Party (AKP) executive committee. In August 2017 the government awarded BMC a contract valued at $350 million to produce 529 armored vehicles for the Turkish armed forces.

The TMSF, supposedly an independent agency whose mandate is to monitor troubled banks and companies to protect economic and financial integrity in Turkey, has been turned into a political tool in the hands of Erdoğan to seize assets and redistribute wealth in order to support his business patronage system. The TMSF has seized over 1,000 companies in the last year or so, valued at some $12 billion. The Turkish president also orchestrated a takeover of a decades-old company called Yavaşçalar Av Spor Malzemeleri Sanayi ve Ticaret A.Ş., which produces explosives, arms and ammunition for domestic and foreign clients. The company was taken over on July 28, 2016 and CEO Ismail Yavaşça was arrested on trumped-up charges.

In June 2017, before the judicial procedures were completed, Erdoğan turned over the Yavaşçalar firms to its rival firm Sarsılmaz Silah Sanayi A.Ş., which is owned by Latif Aral Aliş, a businessman close to Erdoğan. Necmi Demir, a trustee appointed by the TMSF to run the company while the court case moves forward, told employees that the decision was a political one and there was no turning back even if the original owners win the case. As expected, the TMSF approved the unlawful transfer. Aliş made headlines in August 2003 when he gave a gold-plated handgun to Erdoğan during a private meeting in Istanbul. Erdoğan often takes him abroad on his presidential plane when he makes a trip to other countries and facilitates his business transactions. On Sept. 9, 2016 Erdoğan paid a visit to Aliş’s factory in Düzce province, but the meeting was closed to the press.

Although not a private firm, state-owned weapons manufacturer the Mechanical and Chemical Industry Corporation (Makina ve Kimya Endüstrisi Kurumu in Turkish, or MKE) is also among the entities used by Erdoğan to supply arms to jihadist groups. Conflict Armament Research (CAR), an organization devoted to identifying and tracking conventional weapons and ammunition in conflicts, found evidence of ammunition manufactured by the MKE and used by jihadist groups in Syria and Iraq.

As Erdoğan builds his own militia and paramilitary forces, he needs arms manufacturers to supply them with weapons and ammunition. The controversial decree-law No. 696 brought legal immunity and impunity for civilians who fight against what the government describes as terrorist groups or coup plotters. This is quite a worrying development in Turkey that would pave the way for vigilante violence on the streets. It is clear that Erdoğan supports such clandestine schemes to protect his rule in the event he faces difficulties and troubles in using legitimate security forces such as the military and police to crack down on opponents and critics. What is more, his family and business associates have been benefitting financially from consolidation of the military industrial complex in Erdoğan’s hands.

For a president who has invested much in the arms and defense industry, more conflicts, frictions and clashes are expected for Turkey. It is not reasonable to expect that the Erdoğan government will prioritize diplomacy and politics to address problems and settle differences. He has even openly started questioning Turkey’s commitments to the Non-Proliferation Treaty (NPT) and said in several public speeches that nuclear-armed countries should not prevent Turkey and others from acquiring similar capabilities. His chief fatwa (religious edict) giver, Hayrettin Karaman, already approved Turkey possessing weapons of mass destruction including nuclear weapons. No doubt Turkey is heading for murkier times under this crazy dictator who calls all the shots himself.