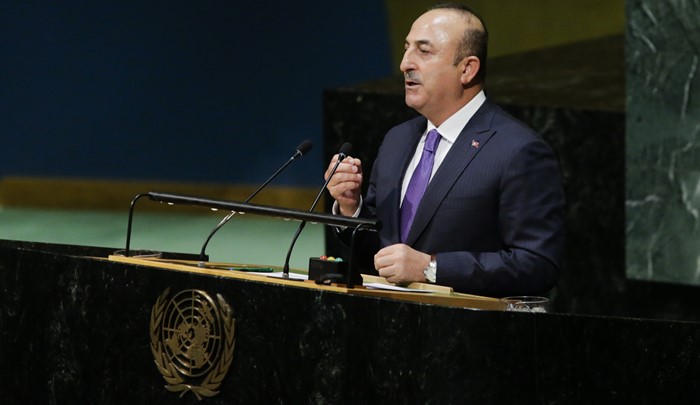 “Today, we will speak up for Jerusalem, the city of three divine faiths,” he said at a UN General Assembly emergency special session called to vote on US President Donald Trump’s controversial decision to recognize Jerusalem as the capital of Israel.

Çavuşoğlu said it is “unethical to think the votes and dignity of member states are for sale,” adding, “You can be strong, but this does not make you right.”

“A UN member threatened all other members. We were asked to vote no or face the consequences,” Çavuşoğlu said.

“Turkey will never let Al-Quds down. The Palestinian people will never be left alone. The world is bigger than five,” he said, noting that Trump’s decision to recognize Jerusalem as Israel’s capital violates international law and relevant UN resolutions.

The UN’s 193-member General Assembly in a stinging rebuke to the US overwhelmingly condemned the US decree on Jerusalem, with a vote of 128 to nine, with 35 abstentions. The US decision has drawn condemnation from across the Arab and Muslim world.

The Trump administration has threatened to punish countries that voted in favor of the resolution rejecting the US recognition of Jerusalem as the capital of Israel and its plans to move the US embassy to that city.

Countries casting their vote against the resolution were Guatemala, Honduras, Israel, Marshall Islands, Micronesia, Nauru, Palau, Togo and the United States. Abstentions included Australia, Canada and Mexico. Voting in favor were US allies Saudi Arabia, Egypt, Japan, South Korea, United Kingdom, Turkey and others along with most members of the European Union.

International law views the West Bank — including East Jerusalem — as “occupied territory” and considers all Jewish settlement building on the land to be illegal.

Jerusalem remains at the heart of the Middle East conflict, with Palestinians hoping that East Jerusalem might eventually serve as the capital of an independent state of Palestine.