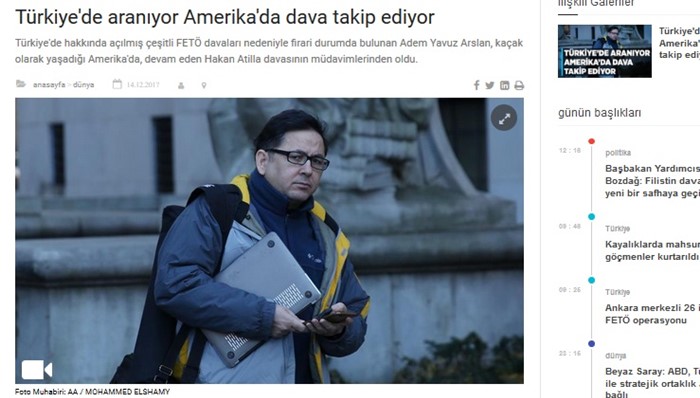 “Adem Yavuz Arslan, who is sought in Turkey, is following the Hakan Atilla case,” wrote Anadolu, adding: “Arslan has been observed running smear campaigns against Turkey during lunch breaks in the proceedings and in the evenings.”

The news agency shared photos and a video of journalist Arslan leaving the courthouse in New York.

Speaking during his periscope broadcast on Wednesday evening Arslan said he was filmed by Anadolu news agency reporters, saying this kind of pressure would not prevent him from pursuing his profession.

Anadolu targeted journalists Arslan and Emre Uslu in another story on Dec. 2 with photos outside the courthouse.

In response to a question regarding the threats made by Ünal, a US State Department official expressed “serious concern” about actions of the Turkish government against its opposition, according to a tweet posted by American journalist Adam Klasfeld.

Arslan and Uslu are among the dozens of journalists in exile accused of having links to the faith-based Gülen movement, which President Erdoğan and his government accuse of masterminding a major corruption investigation in Turkey that became public in December 2013 and implicated the inner circle of the ruling AKP government and then-Prime Minister Erdoğan as well as a failed coup attempt on July 15, 2016.

Turkish-Iranian gold trader Reza Zarrab, prime suspect of the 2013 corruption investigation and main witness in the Atilla case, recently confessed in New York federal court that he had bribed Turkish ministers and bankers in a scheme to evade US sanctions on Iran and said that then-Prime Minister Erdoğan and his son-in-law and current Energy Minister Berat Albayrak ordered a resumption of the same scheme after Zarrab was released from a Turkish prison in 2014.

Hüseyin Korkmaz, a former İstanbul police officer who was arrested by the Erdoğan regime in the aftermath of the corruption operations in late 2013, called Erdoğan the “No. 1” target in a group that also included Mehmet Zafer Çağlayan, the former economy minister, and Süleyman Aslan, a former chief executive at Halkbank, a large Turkish state-owned bank that was central to the scheme.