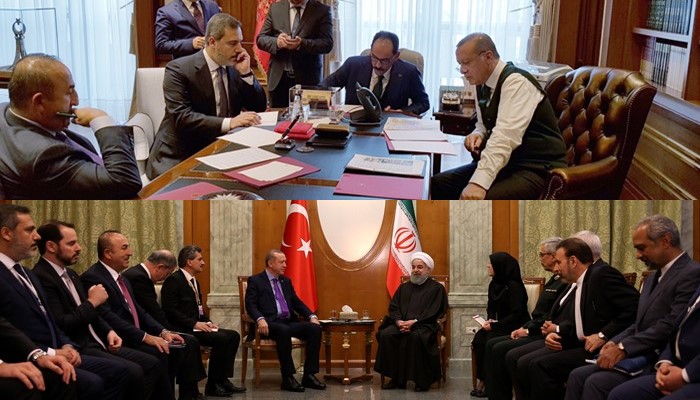 The office of the Turkish presidency has shared a photo while Recep Tayyip Erdoğan was talking on the phone with US President Donald Trump on Nov. 24, 2017, showing that he was flanked by his intelligence and foreign policy chiefs, Hakan Fidan and Mevlüt Çavuşoğlu, head of the Cabinet Hasan Doğan and his spokesperson İbrahim Kalın. Looking at the photo I couldn’t help but wonder how long it took for the full content of the conversation to leak and play for the pleasure of Iranian eavesdroppers. My guess is that it was faster than the White House managed to put out a short readout of the two leaders’ conversation.

Here is why one would be tempted to think that. A top-secret official document, a copy of which I reviewed, reveals how Fidan, the head of Turkey’s National Intelligence Organization (MIT), has been sleeping with the enemy, the Islamic Revolutionary Guards Corps (IRGC), and sharing classified intelligence with Quds Force generals for some time. The Turkish police intelligence unit, authorized by the court on June 13, 2013 to wiretap senior operatives of the Quds Force, intercepted a communication of IRGC general Sayed Ali Akber Mir Vakili, who was heard talking about how he got the minutes of a confidential meeting of the Turkish Cabinet from no other than Fidan himself.

Trained to evade detection and surveillance, Mir Vakili was usually careful in phone conversations to not reveal what he was up to and took measures to ensure he was not followed when meeting with assets in public places. But Turkish investigators managed to plant a wiretap on the car driven by his right-hand man, Hakki Selcuk Şanlı, a Turkish national and convicted felon who helped set up the Quds Force network in the 1990s under the orders of then-IRGC general Nasir Takipur. Şanlı was arrested on May 13, 2000 and was sentenced to 12 years, six months in prison for involvement in terrorist plots targeting Turkish and US interests. But he was freed in 2004 when then-Prime Minister Erdoğan’s government passed an amnesty bill in Parliament reducing sentences for some convicts.

The wiretap from Şanlı’s car that he was driving with Mir Vakili, who was seated on the passenger side, exposed how the IRGC worked secretly with Fidan in gathering intelligence on Turkey. The conversation took place on June 18, 2013, five days after the judge granted the authorization. Mir Vakili told Şanlı that he had talked to Fidan (code-named Emin) and that he learned about a scandal that took place during a Cabinet meeting chaired by Erdoğan in the wake of mass anti-government protests during the Gezi events. Erdoğan was insisting on crushing the nationwide protests with brute police force, while then-Deputy Prime Minister Bülent Arınç and several others in the Cabinet advocated the view of compromising with the lead organizations that launched the protests over a controversial construction project in Istanbul’s historic Taksim Square.

In fact, Arınç, acting as interim prime minister while Erdoğan was away on a trip to North Africa, had already initiated such meetings with NGO leaders, sending signals that the government was willing to take a step back and listen to the concerns of local residents. The Cabinet meeting took place on June 10, 2013 after Erdoğan returned from the trip and lasted six-and-a-half hours, during which a heated discussion took place between Erdoğan and Arınç. Apparently irked by an angry Erdoğan’s insults, Arınç fired back, tendered his resignation and walked out of the meeting.

In the wiretap transcripts that showed the conversation of Mir Vakili with his right-hand man in the car between 18:39 and 19:43 on June 18, 2013, the IRGC operative says he talked to Fidan and learned about this incident from the Turkish intelligence chief. “Aga has gone crazy,” Mir Vakili said, referring to Erdoğan. Şanlı asked who he had talked to about this, and Mir Vakili responded by saying, “With Emin,” Fidan’s code name. When asked to elaborate on the incident, Mir Vakili said Erdoğan was angry at the meeting and claimed he was in a war. He scolded Arınç for saying the government should act calmly, prompting Arınç to fire back and rush out of the meeting in a fury. Mir Vakili also noted that Erdoğan was angry with Iran. He was saying that everybody was against Erdoğan’s harsh position and that the prime minister was making things worse and instead should be silent and let the Interior Ministry handle the protests.

Fidan’s divulging of secret information from the Turkish Cabinet is a clear violation of Turkish laws on espionage and state secrets, and this was well documented with duly authorized wiretap evidence. This is not the only evidence, of course, against Fidan as investigators found out about many meetings that took place between Mir Vakili and Turkish spy chief Fidan in several places including a café owned by another Iranian operative in Ankara’s Cukurambar district, which was patronized by the new Islamist elite in Ankara. The room set up on the top floor of the café was specially designed by MIT to shield against interceptions and eavesdropping. The evidence shows that at least on two occasions Fidan brokered meetings between Mir Vakili and Erdoğan and then-Foreign Minister Ahmet Davutoğlu in Ankara, assigned a protective detail for the IRGC general’s family and friends when he came for a shopping spree in Ankara and even provided a government plane to fly Mir Vakili back to Tehran.

In the photo Fidan was sitting across the table, facing Erdoğan, who was speaking to Trump on the phone. Knowing all these details about a man who was nurtured in Shiite studies in the Turkish capital while he was a low-key noncommissioned officer in his youth, one cannot help but wonder whether IRGC operatives were eavesdropping on this highly confidential conversation. There is another photo that intrigued me from Nov. 22, 2017 when Fidan was seen sitting across from an Iranian delegation during a meeting in Tehran between the Turkish and Iranian presidents. Perhaps he was on the wrong side of the aisle and would have felt more comfortable seated with his comrades from the Iranian security and intelligence agencies.

It is unbelievable for NATO ally Turkey to allow its security and intelligence institutions be breached and penetrated under an Islamist government that apparently despises long-time traditional allies while cozying up to the mullah regime, which has always harbored nothing but ill-intentions for Turkey. The US federal case of Hakan Atilla, a senior banker at state lender Halkbank, which violated sanctions in violation of both Turkish and US law in exchange for millions of dollars in bribes, showed only a partial picture of what Iran could do with gold smuggler Reza Zarrab.

The depth and the extent of Iranian penetration into the national security institutions of Turkey should generate much bigger concerns for Turks and their allies. It is no coincidence that Erdoğan has been copying the textbook of the Iranian revolutionary path when it comes to running clandestine activities in Turkey and abroad, cracking down on independent judges and prosecutors, muzzling critical voices in the media and civil society, bullying and bashing allies and partners and mobilizing proxies in other countries.