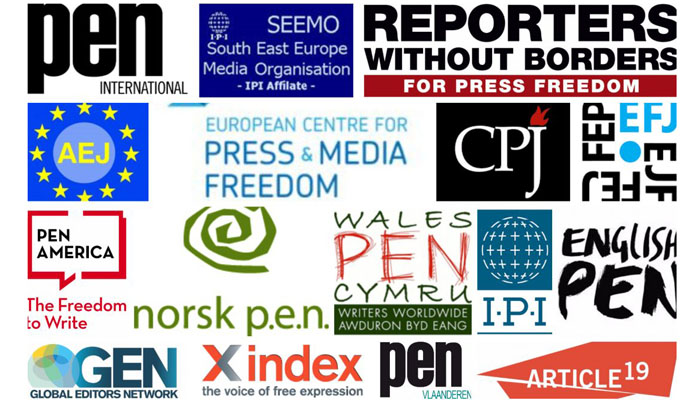 Several international press organization under the flagship of the European Federation of Journalists (EFJ) urged the European Union and its member states to use their influence within the Council of Europe and urge them to be less deferential towards Turkey on rights violence.

In a statement from EFJ website on Thursday, PEN International, PEN Belgium/Flanders, the European Centre for Press and Media Freedom (ECPMF), Article 19, the Association of European Journalists (AEJ), the Committee to Protect Journalists (CPJ), the European Federation of Journalists (EFJ), the Global Editors Network (GEN), Index on Censorship, the International Press Institute (IPI), American PEN, Danish PEN, English PEN, Norwegian PEN, Wales PEN Cymru, Reporters without Borders (RSF), and the South East Europe Media Organization (SEEMO) underlined that they have four requests from the EU, its institutions including the European Parliament, and its member states, in light of findings and concerns that have emerged through their work on freedom of expression in Turkey.

The four requests were:

“First, we call on the EU, its Institutions and its Member States to duly implement the EU Guidelines on Freedom of Expression and EU Guidelines on Human Rights Defenders and to live up the high expectations that were raised therein. …”

“Second, civil society is under attack in Turkey, and the space for civil society actors and human rights defenders is shrinking.  .. We call on the EU and its Member States to continue and expand its support to Turkish civil society, both politically and financially.”

“Third, it is our view that Turkey has been abusing Interpol’s Red Notice system to attempt to extend internationally its persecution of journalists, writers and others for having exercised peacefully their right to freedom of expression and opinion. ..”

“Fourth, considering the many fair trial violations we have observed throughout our trial monitoring as well as the many other human rights violations committed by the Turkish authorities since the state of emergency was declared, the role of the European Court of Human Rights in ensuring justice for victims has become ever more important. Especially at a time when the Council of Europe’s human rights system is under pressure, emanating from actions or lack thereof by both EU and non-EU Member States. ..”

The statement also called on the EU and its member states to “use their influence within the Council of Europe and urge them to be less deferential towards Turkey; and,

play a positive and guiding role with a view to implementing and strengthening the EU’s and the Council of Europe’s shared commitments to democracy and human rights.”

The international press groups also said they are ready to contribute to the constructive efforts by the EU and its member states to support persecuted journalists and writers in Turkey and to improve the situation for freedom of expression in the country.