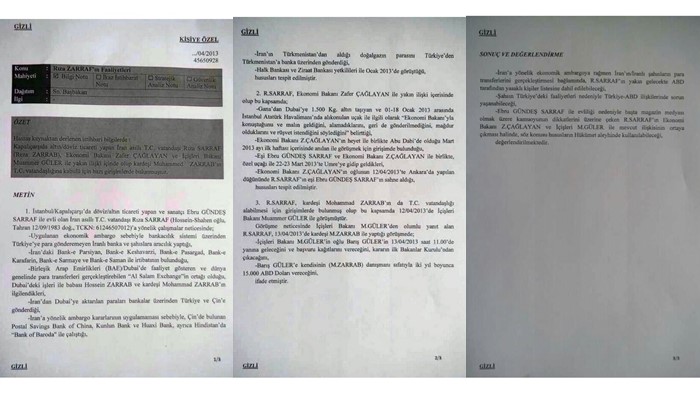 In a report dated April 2013, the National Intelligence Organization (MIT) warned then-Prime Minister Erdoğan about Zarrab’s corrupt relations with Turkish Cabinet members. MİT also told Erdoğan that the US could add Zarrab to the list of people who violated sanctions on Iran and that the revelation of Zarrab’s relations with Economy Minister Zafer Çağlayan and Interior Minister Muammer Güler would be used against the government.

Underlining that the report was submitted to Erdoğan nine months before corruption operations that went public on Dec. 17, 2013, Kılıçdaroğlu during his speech at the Arean Sports Hall in Ankara said: “You [Erdoğan] closed the file. Your government worked with Zarrab. Your government betrayed the Republic of Turkey.”

The CHP leader also condemned the pro-Erdoğan media that conducted an interview with Zarrab in front of a Turkish flag and the ministers who awarded Zarrab as a leading exporter.

“You [Erdoğan] knew everything from the beginning,” said Kılıçdaroğlu, calling on prosecutors who recently launched an investigation into Zarrab to fire the prosecutors and judges who released Zarrab and closed the case in 2014 and to investigate the government’s cooperation with Zarrab.

Zarrab was the prime suspect in a major corruption investigation in Turkey that became public in December 2013 and implicated the inner circle of the ruling AKP government and then-Prime Minister Recep Tayyip Erdoğan. Zarrab was alleged to have paid Cabinet-level officials and bank officers bribes to facilitate transactions benefiting Iran.

After Erdoğan cast the case as a coup attempt to overthrow his government orchestrated by his political enemies, several prosecutors were removed from the case, police were reassigned and the investigation against Zarrab was dropped in Turkey.

Police notes of the Dec. 17 operations show that Zarrab personally talked with Erdoğan on April 13, 2013 and asked for an official police guard. Erdoğan and his Cabinet approved it immediately.

A phone call and a video in the Dec.17 file show that Zarrab in July 2013 sent an unspecified amount of money to the Service for Youth and Education Foundation of Turkey (TÜRGEV), a foundation run by Bilal Erdoğan, Erdoğan’s son.

Zarrab who was arrested in the US in March 2016, and eight other people, including Turkey’s former economy minister and three Halkbank executives, have been charged with engaging in transactions worth hundreds of millions of dollars for Iran’s government and Iranian entities from 2010 to 2015 in a scheme to evade US sanctions.

Zarrab testified in federal court on Wednesday that he had bribed Turkey’s former economy minister, Çağlayan, in a billion-dollar scheme to smuggle gold for oil in violation of US sanctions on Iran.

On Thursday Zarrab said that Turkey’s then-prime minister and current president, Erdoğan, personally authorized the involvement of Turkish banks in a scheme to evade US sanctions on Iran.

Zarrab also said for the first time on Thursday that Turkey’s Ziraat Bank and VakıfBank were involved in the scheme and that former Deputy Prime Minister Ali Babacan signed off with Erdoğan on the operation.

The Turkish-Iranian gold trader on Monday said he made payments to secure his release in February 2014 and that those payments were partly bribes.