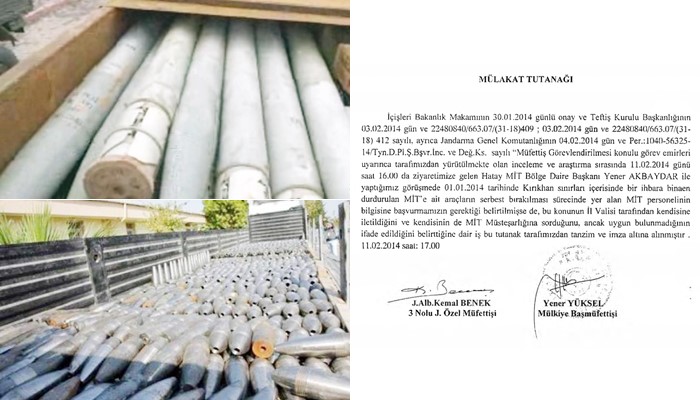 The cover-up in the transfer of heavy arms to terror organizations in Syria by the government of President Recep Tayyip Erdoğan was well documented in the case of an intercepted truck on Jan. 1, 2014. The government moved in very quickly to prevent an independent judicial investigation into the illegal shipment, preventing the chief prosecutor from doing his job with the blatant political interference and pressure.

Confidential documents reveal operatives of the National Intelligence Organization (MİT), Turkey’s spy agency, got caught breaking Turkish laws in arming jihadists in Syria but were saved by Erdoğan, who hushed up the probe. This particular incident took place on the Syrian border in the city of Kırıkhan in Turkey’s southern province of Hatay when a tip was received by the gendarmerie on Jan. 1, 2014 at 16:00 on the 156 public emergency hotline. The information was quite specific as it detailed the license plate numbers of the tractor (06 BR 8860) and trailer (06 DE 3290). It identified the escort car’s brand as a Fiat Linea bearing tag number 31 Y 5060. The intel, immediately conveyed by the call center to the Kırıkhan gendarmerie, was compiled into a report by two sergeants, Ibrahim Kaplan and Mahmut Göçer, and submitted to the commanding officer for review.

Since the intelligence suggested a terrorist crime of a serious nature, Capt. Kubilay Ayvaz, the commander of the gendarmerie post in the district of Kırıkhan, informed the veteran counterterrorism prosecutor in Adana province, Aziz Takçı. He said the trailer was believed to be full of illegal arms and asked for permission to search the cargo. Takçı granted the request and ordered the identification of all suspects involved in the illegal shipment and the search of not only the cargo but also the escort car and the suspects’ personal belongings. He also instructed the captain to video record the search and seizure being executed.

Gendarmes intercepted the vehicles near Kırıkhan and attempted to search the cargo. But the suspects in the escort car said they were intelligence officers working for MİT and did not allow execution of the search and seizure warrant. They neither showed their IDs nor presented any document indicating that the shipment was authorized according to established rules and strict regulations in the transport of firearms and explosive materials.

Some 12 to 15 more people arrived at the scene from the intelligence agency and prevented the search of the truck. The prosecutor on the scene was Yaşar Kavalcıoğlu, assigned to the case by Takçı, who issued the search and seizure orders. Kavalcıoğlu said intelligence officers refused to identify themselves and attempted to replace the cargo container full of arms with an empty container. When that was refused by the prosecutor, they threatened to engage in a shootout to prevent examination of the cargo if it came to that. At one point, several agents attempted to beat Kavalcıoğlu, but he was saved by Capt. Ayvaz, who was on the ground to coordinate the execution of the search and seizure warrant.

MİT overpowered the prosecutor and the captain’s team, got in their vehicles and hastily hauled away the cargo in defiance of the legal order. This obstruction of justice prompted prosecutor Takçı in Adana province to launch a criminal investigation into the MİT agents and other officials who played a role in preventing the enforcement of a judicial search and seizure order. In investigation case file No. 2014/2, Takçı stated that Antalya Governor Mehmet Celalettin Lekesiz broke the law by issuing a written order to halt the search and as a result flagrantly interfered in a judicial matter. In document No. 92725089-889-02/01, which was issued by the governor’s office and signed by Lekesiz, the gendarmes who were working with the office of the chief public prosecutor as part of a judicial force was instructed to disobey the judiciary’s orders and release the vehicles and MİT agents. Lekesiz also informed Erdoğan’s office about his actions. The prosecutor was planning to file obstruction charges against the governor and other officials who contributed to the failure of the search.

An email sent on Jan. 2, 2014 to the chief public prosecutors’ offices in Adana and Hatay by a man identifying himself as Ali Ayan stated that the shipments intercepted but let go a day before in Kırıkhan were actually destined for a terrorist al-Qaeda group in Syria. The man claimed he was present during the loading of arms on the truck and said the shipment was disguised as humanitarian aid. “They were exerting extra efforts to hide the shipment from detection by the police and gendarmerie,” the person wrote, giving plate numbers of the tractor and trailer that matched the ones intercepted. The message was incorporated into the case file by Adana Chief Public Prosecutor Süleyman Bağrıyanık, and prosecutor Takçı asked the police investigators on Jan. 9 to verify the claims in the email, find the whistleblower if possible and pursue further leads.

The prosecution against MİT officers in case file No. 2014/2 stipulated that the intelligence officers broke Article 315 of the Turkish Penal Code (TCK), which prohibits any party from providing weapons to terrorist organizations. It stipulates from 10 to 15 years for offenders. Prosecutor Takçı was also seeking a sentence for violation of Law No. 6136 on Firearms, Knives and Other Weapons. However, the case was hushed up when the Erdoğan government replaced Takçı on Jan. 21, 2014 and brought in a new, partisan prosecutor named Ali Doğan, who dropped the probe on Feb. 10, 2014. He also notified MİT and asked them to not respond to inquiries sent to the intelligence agency by the former prosecutor who had pressed charges against the MİT agents.

Terrified of the revelations from the case file on illegal arms shipments, the Erdoğan government rushed to secure a gag order from the court, banning all news reporting on the incident. A secrecy order was applied to the case file and the “state secrets” clause invoked, although Turkish law does not recognize the protection of state secrets when there is a reasonable suspicion that a crime has been committed. In other words, the criminal act of supplying arms to the al-Qaeda terrorist organization cannot be protected under the cover of state secrets. Erdogan also rushed an amendment to an intelligence bill in Parliament to empower MİT with a range of immunities and made the criminal prosecution of spy agency employees subject to his explicit permission.

To send a warning to other public prosecutors who might be looking into illegal operations by intelligence agency operatives, Erdoğan orchestrated the arrest and imprisonment of those prosecutors including Takçı as well as police chiefs and military generals who were involved in probing MİT’s clandestine activities on the Syrian border. Prosecutor Kavalcıoğlu, who testified in his deposition against the MIT officers, accusing them of preventing him from doing his job on the ground, was detained on April 16, 2017 in Istanbul and formally arrested four days later in Ankara. Turkey’s top notch investigative reporters such as Mehmet Baransu were jailed over the exposé of this case file, while several other journalists had to flee Turkey to escape wrongful imprisonment under the Erdoğan regime.

Nevertheless, the courageous Turkish prosecutors managed to open the secrecy lid on MİT’s illegal arms shipments to jihadists with this case on Jan. 1, albeit half-way through. The follow-up probe right after the incident left an important paper trail to make possible an informed decision as to what MİT was up to. They blew the cover completely on Jan. 19 when the search warrant was fully executed on another shipment, exposing heavy arms in the cargo of trucks escorted by MİT officers. The Jan. 19, 2014 incident deserves further and careful analysis on how MİT has dispatched thousands of trucks full of arms to jihadists in Syria to fuel a dirty war of regime change. Perhaps one day Erdoğan will have to stand trial for arming jihadists, which led to the killing of so many in Syria and other places.