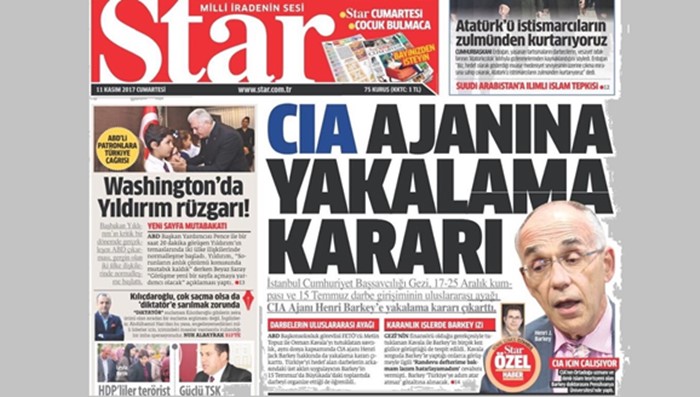 The İstanbul Chief Public Prosecutor’s Office has issued a detention warrant for academic Henri Barkey, director of the Middle East Program at the Washington-based Wilson Center, for being behind the Gezi protests of 2013, the corruption operations of Dec. 17-25 in 2013 and a failed coup attempt in Turkey on July 15, 2016, the pro-government Star daily reported on Saturday.

According to the report the detention warrant for Barkey was issued as part of an investigation that includes businessman and civil activist Osman Kavala and US Consulate General employee Metin Topuz. Kavala and Topuz were arrested last month for “attempting to abolish the constitutional order and attempting to remove the government of the Turkish Republic.”

Based on the investigation Star claimed that Barkey is a CIA agent and had met with suspects in all the murky events in Turkey and abroad. Barkey has met many times with Kavala, but Kavala failed to remember and declined to confirm the meetings.

“According to the investigation Henri Barkey organized and coordinated the coup attempt during a meeting on Istanbul’s Büyükada on 15-16 July, 2016,” the report said.

“Barkey left a bell reading ‘Pennsylvania’ with the hotel receptionist when he left Büyükada Hotel on July 17.”

In February, Barkey said that many generals purged by the Turkish government are pro-NATO and pro-American, saying this could create a shift in Turkey-NATO relations.

In April, the İstanbul chief public prosecutor launched an investigation into 17 prominent US figures including Senator Chuck Schumer, former US Attorney for the Southern District of New York Preet Bharara, former CIA Director John Brenan and Barkey for alleged links to the faith-based Gülen movement.

The prosecutor has started to investigate the details of a meeting of some of the “suspects” on İstanbul’s Büyükada on July 15 and in Karaköy on July 17, 2016, the reports said.

According to a White House readout of the meeting, Pence expressed “deep concern” over the arrest of American citizens, local staff of US missions in Turkey and hundreds of journalists and members of civil society under a state of emergency that was declared following a failed coup on July 15, 2016, urging transparency and due process in the resolution of their cases.

Pastor Andrew Brunson is another American citizen who has been in custody since October for alleged links to the Gülen movement, was charged with acquiring secret political and military information, attempting to destroy constitutional order and overthrow the Turkish Parliament.

Erdoğan also accuses the Gülen movement of masterminding the failed coup attempt in Turkey on July 15, 2016.

Turkey has suspended or dismissed more than 150,000 judges, teachers, police and civil servants since July 15. Turkey’s Justice Ministry announced on July 13 that 50,510 people have been arrested and 169,013 have been the subject of legal proceedings on coup charges since the failed coup.

The government has seized to at least 1,068 companies and 4,888 properties as part of a witch-hunt targeting the Gülen movement.